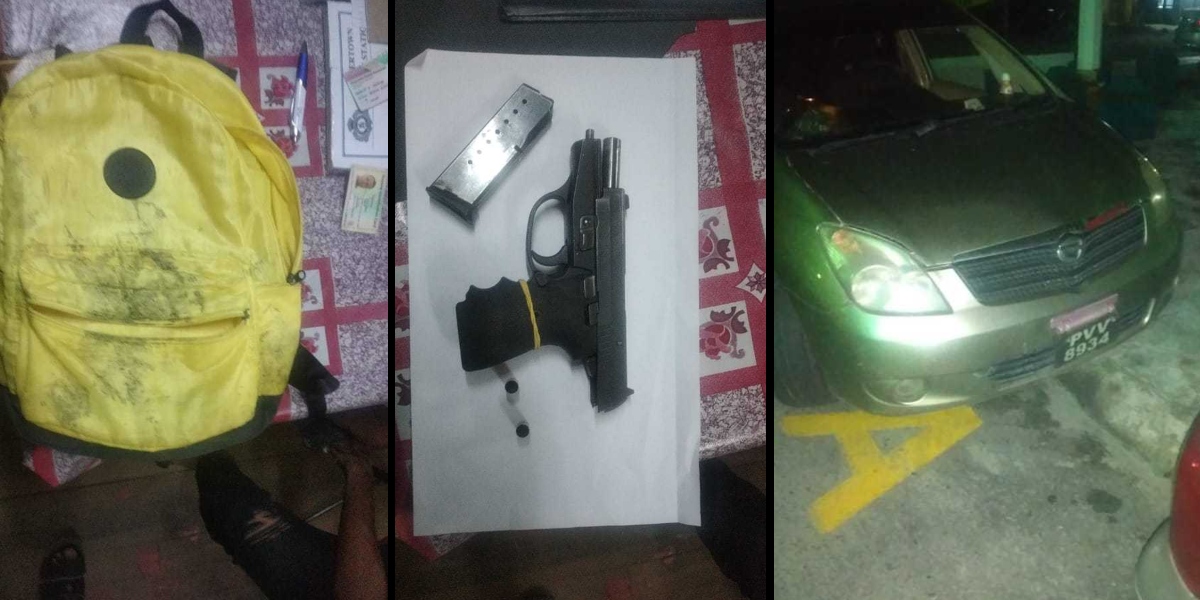 A 30-year-old man of Timehri, East Bank Demerara is now in police custody after he was apprehended with a .32 pistol.

The man was nabbed around 02:00hrs on Saturday at Croal Street, Georgetown, with the assistance of three private security officers attached to the Blackwater Tactical Security Firm.

The three security officers were doing residential checks/patrol when they stopped to purchase food at Light Street. They heard several loud explosions coming from Regent Street before observed a man carrying a yellow haversack running south along Light Street.

They then gave chase on foot behind the man who was running towards a Silver Toyota Spacio PVV 8934 which was parked at the corner of South Road and Light Street.

As the security ranks approached the vehicle, a male occupant exited the car and both parties then ran west along South Road.

Two of the security officers continued to chase behind the said male with the haversack who ran South along Louisa Rowe.

The man then threw the haversack into a church compound located on Cummings Street between Brickdam and Croal Street. He was subsequently apprehended on Croal Street.

The haversack was retrieved by the officers, and searched in the man’s presence and a black .32 Sig Sauer pistol along with two .32 spent shells and a magazine were found in the haversack.

The firearm and magazine were lodged at the station.

The motorcar was also impounded at the Alberttown Police Station.

The car was searched and a driver’s licence belonging to a Timehri resident and an identification card of a soldier were found.

The suspect remains in custody, as investigations are ongoing.

Meanwhile, Commissioner of Police (ag.) Mr. Clifton Hicken has lauded the collaboration and partnership between the private security guards and ranks of the Guyana Police Force.