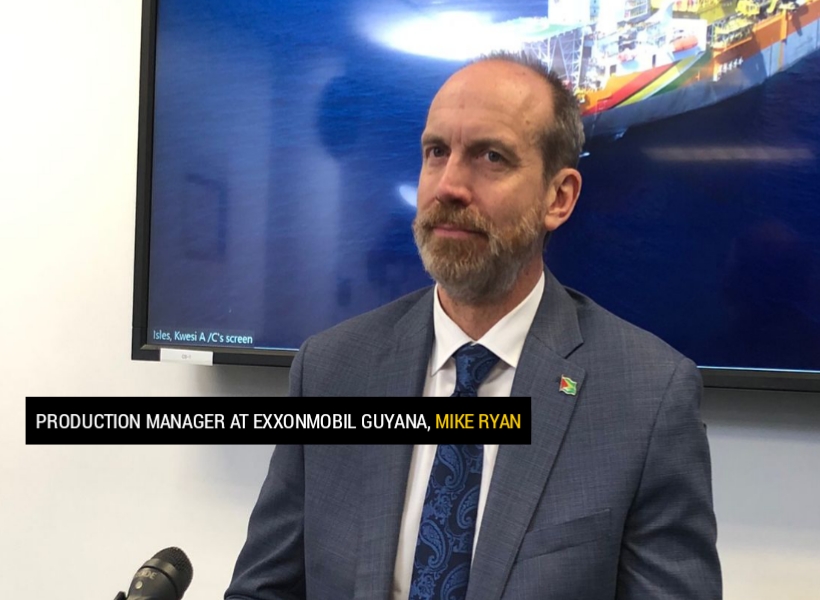 Production Manager for ExxonMobil Guyana, Mike Ryan was pleased to report today that the gas compressor issues at the Liza Destiny floating, production, storage and offloading (FPSO) vessel have been addressed for good. Ryan told media operatives today that the new gas compressor has been delivered from Germany and successfully installed, thereby allowing the Liza Destiny to reach background flaring of less than one million standard cubic feet of gas.

Previously, the Liza Destiny was flaring between 15 to 7 million standard cubic feet of gas per day.

Ryan said, “We have finally met our expectation of delivering the new gas compressor, installing it, and safely starting it up in July. We have achieved background flare too. It is a remarkable accomplishment by a lot of people who have been relentlessly pursuing this. We have gone 1000 days without injury which is really world-class performance and we should be very proud of all the Guyanese working on the compressor.”

The Production Manager further noted that production optimization work was completed on the Liza Destiny and it is now producing 140,000 barrels of oil per day.

As for the Liza Unity FPSO, Ryan said it has also achieved background flare within a record 60 days. Even more impressive is the fact that the vessel is producing at its nameplate capacity of 220,000 barrels of oil per day after coming into operation in February, last. It therefore means Guyana’s total production stands at 360,000 barrels of oil and is set to increase with optimization works in the pipeline for Liza Unity.

To date, the Exxon official said just about US$10M in flaring fees has been paid to the Environmental Protection Agency (EPA).

He noted that the Liza Destiny’s new gas compressor will now embark on an endurance test run where it will be monitored to ensure it is running as expected. The old compressor will be sent to Germany to undergo further upgrades and kept in-country as a spare.