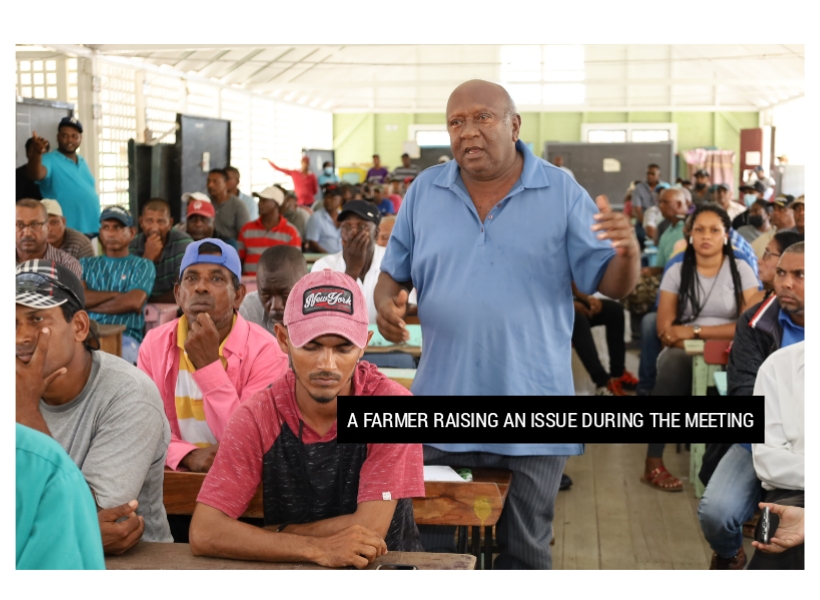 Rice farmers from the #52 to #74 area on the Corentyne Coast in Region Six (East Berbice – Corentyne) were assured that all the dams in cultivation areas would be rehabilitated as soon as possible.

This was disclosed by Agriculture Minister Zulfikar Mustapha during a meeting with the farmers at the New Market Primary School on Wednesday.

During the meeting, many farmers told the minister that the dams were in a deplorable state and that they were having issues accessing their rice fields. In addition to the terrible state of the dams, farmers said several canals in the cultivation areas needed to be cleared.

One invitee said farmers had rice that would be ready for harvesting in a few days but given the state of the dams, it would be difficult.

“We have in there about 70 acres of rice bearing there now. We need the dam to track out…This is urgent,” the farmer said.

While responding to the farmers’ concerns, Minister Mustapha said that the ministry has a continuous dam maintenance programme and called on farmers to be more responsible when using the dams, especially during the rainy periods.

“…We have to work together to develop better strategies and be a bit more responsible. When farmers cut their rice and use the dams irresponsibly, these dams are once again destroyed. Some farmers have no consideration for other farmers who have to use the dams…,” expressed the minister. He said permanent all-weather roads will soon be establisted across the country. “Hopefully, we can start some of those works next year,” the minister added.

He also told farmers that while the ministry has been working across the country to ensure all of the dams in the cultivation area were repaired, persistent rainfall due to climate change continues to bring further difficulties.

Mustapha noted however that by the end of this year, the nation will have an additional 11 pumps in the system. “We are working with a financial institution to be able to procure another 40 pumps so that we can have pumps installed at every sluice across the country,” the official stated while adding that he has asked the National Drainage and Irrigation Authority (NDIA) to inspect those areas that have canals which need to be cleared so that a programme can be developed towards efficiently addressing those channels.