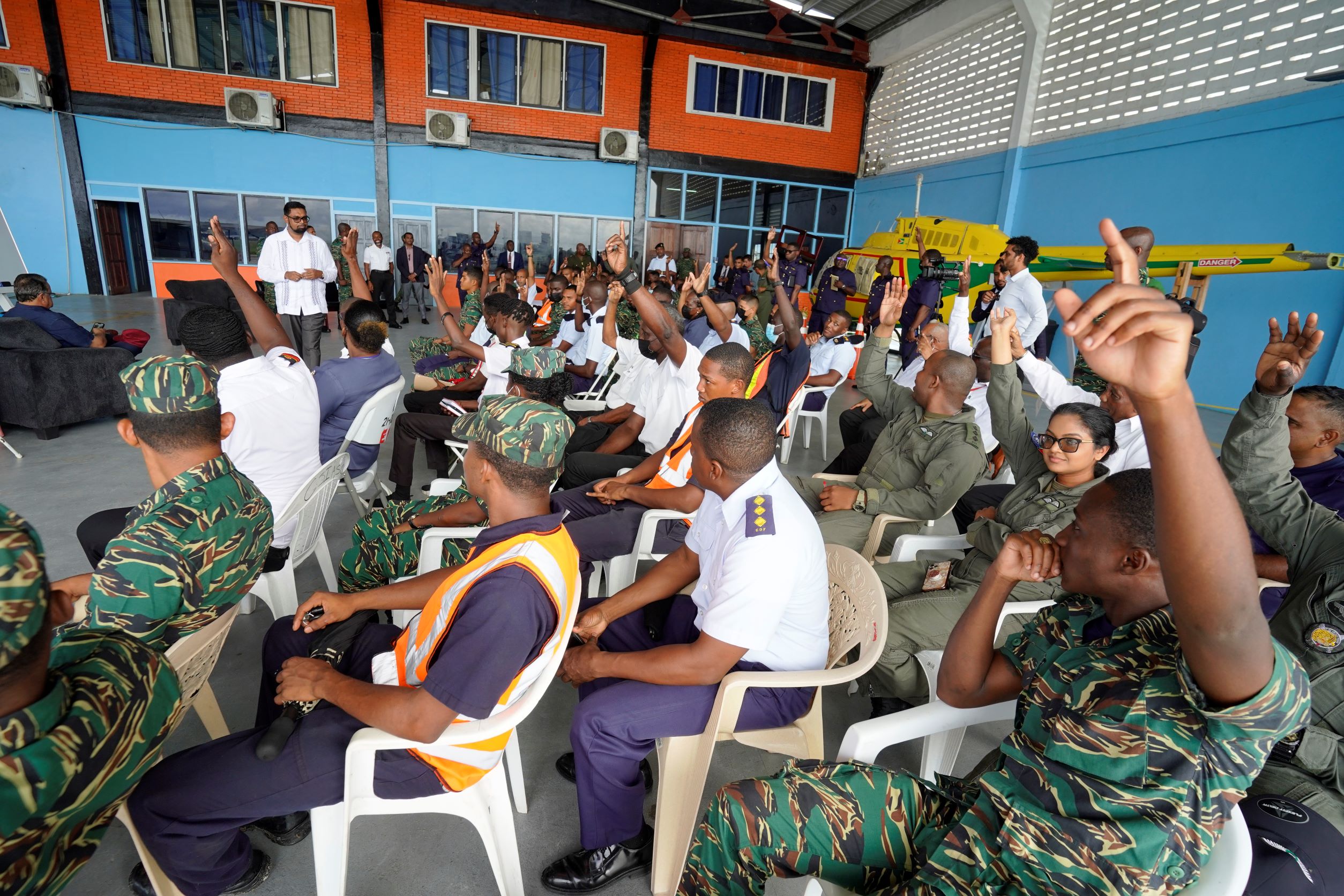 President, Dr Irfaan Ali said he wants the Guyana Defence Force (GDF)’s Air Corps to become the premier Air Corps in the Region, by leading by example and by reflecting the best standards.

The Commander-in-Chief of the Armed Forces made the statement on Thursday afternoon while interacting with Air Corps ranks at the Air Corps Hangar in Timehri.

“So today is about working to get to those standards. It’s about understanding each of you and what you’re thinking, how you’re thinking because frankly speaking, we can’t make this investment if people are not ready to invest their future with us too. It’s a two-way street. So we have to understand the gaps and we have to work on filling those gaps so that we are going to come up with an action plan today.”

While President Ali spoke about the importance of identifying and addressing gaps, which will allow the Air Corps to transcend to the highest level, he pointed to the pillars needed.

High on the agenda, he explained, is the establishment of an academy and development programme, which can be integrated with a scholarship programme as well as the national training programme and eventually with the regional programme.

“So I must go to the Heads of Government and say to them that we have a one-year plan on bringing our Air Corps to this level and I want the commitment that you’re going to use us for all your training.”

The President spoke about the possibility of having a military-operated commercial arm of the unit and about the equipment needed for such a directive. He also noted that discussions are ongoing as to what equipment to invest in while revealing that the Air Corps will be getting a second chopper. The effective deployment of the chopper is being examined.

“This is about us making some important decisions as to where we want to position Air Corps. In my mind, I want to position it as the best Air Corps in the region and we are already making investments in human resources. We’re spending a lot of money.”

In the discussions forward, President Ali urged those present to share their ideas and to be honest, open, and frank in their dialogue.

National Security Advisor, Captain Gerry Gouveia; Chief of Staff of the GDF, Brigadier Godfrey Bess and other Government officials and senior ranks and officers of the GDF and Air Corps were also at the event. (Press and Publicity Unit, Office of the President)