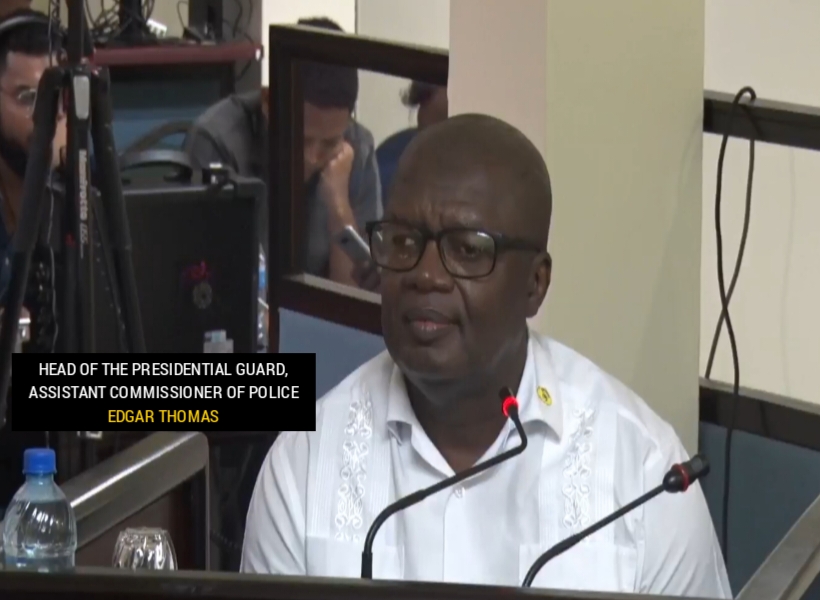 Head of the Presidential Guard, Assistant Commissioner of Police, Edgar Thomas was the second witness called to the stand at today’s Presidential Commission of Inquiry (CoI) into the 2020 General and Regional Elections.

His testimony is regarded as key to understanding the length and breadth of events that unfolded during those times since he served as the Divisional Commander of District Four and was mandated to provide external security at the Command Centre at the Ashmins Building.

Thomas told the Commission that on March 5, 2020, he received a complaint from officials at the GECOM building. He said it was alleged that someone who was a part of the tabulation process had removed a flash drive and was seen tampering with vital data.

“On my arrival, there were multiple reports coming in, and all the reports said the same thing, that someone who was a part of the tabulation process was seen leaving that room and entering another and was tampering with the data on a flash drive,” he noted.

Thomas recalled that the complaint came from politicians, and observer missions including those attached to the European Union. He further noted that he and another rank proceeded to a room where the tabulation was being done.

Enrique Livan, an employee of GECOM, who was in charge of computing tabulated data, was not in the tabulation room according to Thomas. He noted that there was more than one room in the flat. Livan however was in another room.

“He was sitting, bending over on the table, on the desk… a laptop was on the desk… The computer was closed… He (Livan) said he was tired and he came out of that room… My intention was to have the computer and flash drive in the care of the police,” Thomas said.

He recollected that he and several officers, based on the complaints, were seeking to retrieve the electronic device but decided not to after recognizing what it was and the importance it had for the tabulation process. He noted that both the flash drive and the computer were taken back to the tabulation room.

He further stated that there were differences in the content on the flash drive. Thomas recollected that when the data was shown on the screen, (Health Minister) Dr. Frank Anthony objected by saying, “This is not where we left off.”

Thomas said political parties, by request, were given hard copies of the tabulation data to verify the alleged inconsistencies that were discovered on the screen.