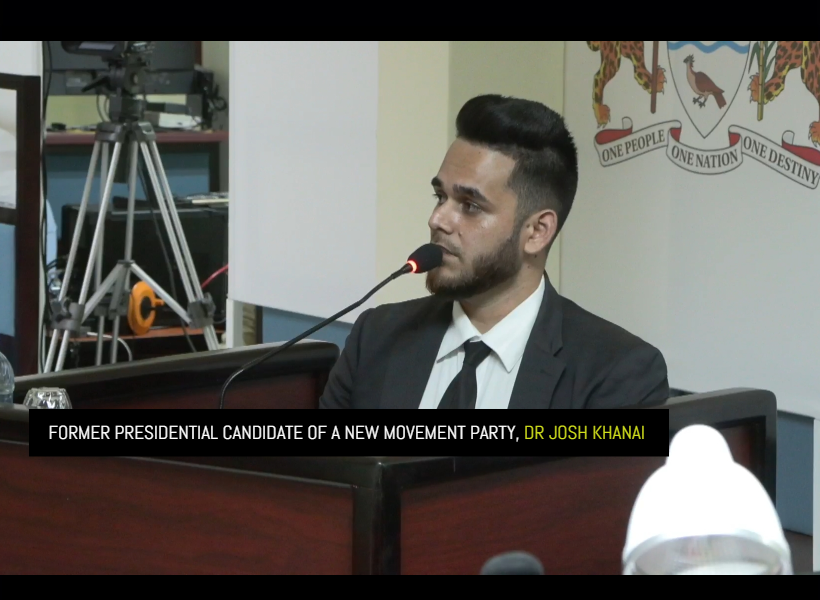 Former Presidential Candidate of A New Movement Party Dr. Josh Khanai recounted, on the second day of hearing at the Presidential Commission of Inquiry, that he was arrested for kicking down a door at the command center, an act he said was in the interest of the GECOM chairperson’s safety.

Dr. Khanai recounted that in the tabulation room of GECOM’s Command Centre in the Ashmin Building, agents from all parties who contested the elections were comparing data from the Statement of Polls. He noted that on the day of the incident, there were already three delays due to various reasons, including a bomb threat.

He noted that party agents were informed by the tabulation clerk that the process had been stopped due to the fact that GECOM agents were exhausted. Dr. Khan said that he and other agents had refused the suggestion. But this was to no avail.

“He was insisting that we stop. He started to arrange his desk and he started to pack. Basically to pack up and go to the other office where they would be resting. He eventually left the tabulation room.” Dr. Khanai said.

He noted that a number of events had unfolded during the evening of March 5 2020, including the highly publicized flash flash drive incident . Dr. Khanai however decided to stay at the command center as he became suspicious.

He recounted that he left later that morning but returned as things got complicated at the command center. Two members of his party according to Dr. Khanai had informed him of a rumour that the election was going to be declared by GECOM. He said he immediately rushed back to the command center, since according to him, the verification process was not completed.

The former presidential candidate said that he met with a Detective who was pleading with police officers to let him into a barricaded area. The Detective told the officers, according to Dr. Khanai, that he was trying to reach the Chairperson of GECOM who had called him complaining that she was unwell.

GECOM’s Chairperson was reportedly locked behind a secure door. He said, “That is where it became interesting because all the locks from outside were visible but the handle was broken off. I started to push against that door and I started to kick it. Given all that was going on and the state of Detective Naraine and given that there was an injunction to be filed… I was thinking in my head that if something was wrong with her how derailed this process would get.”

Dr. Khanai said that after kicking down the door the Chairperson was found and immediately taken by paramedics on standby to the hospital. He was then arrested and taken to the station. To this day, Dr. Khanai was not charged for the incident.