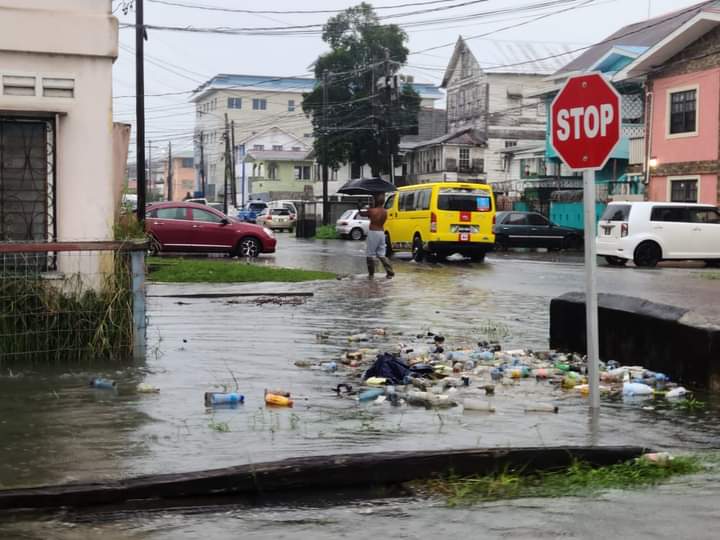 Responsibility for the flooding of Georgetown on Tuesday must be placed squarely at the feet of President Irfaan Ali and the ruling People’s Progressive Party/Civic (PPP/C).

This is according to the People’s National Congress Reform (PNCR), a day after thunderstorms pummelled Georgetown and other parts of Guyana’s coastline, leaving several communities inundated.

“The government’s incompetence, starving of the city of resources, seeking to control all development in Georgetown and bypassing the elected council are responsible for the high level of flooding we are experiencing in the City,” the Opposition party said in a statement earlier today.

It added, “What makes the PPP’s policy terrible is that the floods cost the people a lot in damages. It is worse when it is noted that people who are finding it difficult with the high cost of living have to spend their scarce resources to repair damages and replace damaged equipment, inter alia. Many businesses are suffering because of the PPP’s ill-informed policies and programmes.”

The PNCR said that when it was part of the Coalition government between 2015 and 2020, plans were implemented to ensure
that Georgetown is well-drained and cleaned thus significantly reducing flooding in the City.

“Flooding is back thanks to PPP incompetence, negligence and its desire to punish a Council elected by the people. The PPP in its quest to dominate and control the City Council is pursuing a policy of starving the Council of resources and allowing garbage to build up and drains to clog,” the party said days after the President, himself, led cleanup exercises across the capital.

But even those exercises have gotten bad reviews from the PNCR.

It noted, “It must be noted the PPP involves itself in so-called clean up exercises that put money in the hands of their cronies while not resulting in a clean and well-drained city.”

It further noted, “The focus must be on improving the quality of life of the people in Georgetown and not on promoting PPP corruption and public relations stunts under the guise of clean up campaigns.”

The party is calling on Guyanese to condemn the regime and to reject it at the polls.

“In a democratic society, the State is obligated to allocate resources to the elected City Council so that they can serve the people of Georgetown. Unfortunately, the PPP talks about democracy but acts in a dictatorial way.”