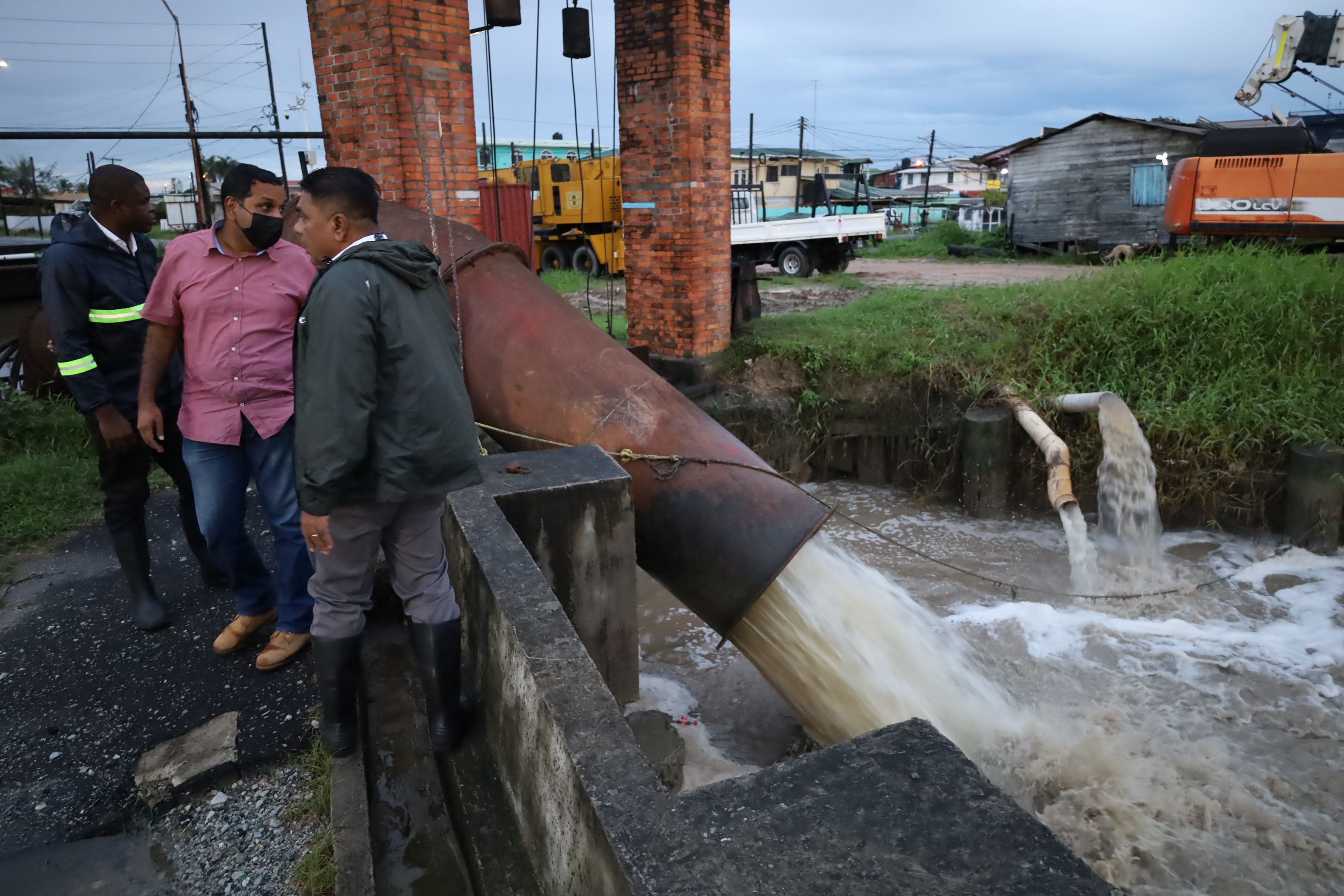 With several areas across the country experiencing high water levels due to increased rainfall, the National Drainage and Irrigation Authority (NDIA) has intensified its operations to ensure affected areas are drained within the shortest possible time.
Last Tuesday, Agriculture Minister, Zulfikar Mustapha visited several of the City’s drainage structures to assess their operations as part of the ministry’s efforts to prevent flooding in Georgetown. Last evening, he also visited the river defense dam at Grove on the East Bank of Demerara after receiving reports that there was overtopping at several areas due to the recent high tide.
While offering comments on the current state of affairs, Minister Mustapha confirmed that all the structures were operable and that the engineers from the NDIA were monitoring the situation on a 24-hour basis.
“Our engineers have been working around the clock to ensure these pump stations and sluices are functioning effectively. We know for a fact that the entire Coast is below sea level and with climate change contributing to higher water levels and unpredictable weather conditions, the Coastal Regions have become even more vulnerable. Last Tuesday it was reported that sections of Enterprise on the East Coast of Demerara recorded the highest level of rainfall; some 105.4 mm, so you can understand the amount of pressure being placed on our drainage system,” Minister Mustapha said.
He further stated that the ministry is putting a number of other systems in place to assist with effectively draining affected areas. He also signaled a call to residents to desist from dumping garbage in the waterways.
“In addition to having our fixed pumps working, we are operating the sluices when the tide is out. The ongoing nationwide clean-up efforts have also contributed to the timely drainage of the City and I think citizens should look at the effects pollution is having on the effectiveness of our drainage system. A lot of money is spent to procure and install these structures and often times they are damaged when garbage gets into the pipes and other parts of the structures. This is why we need those additional pumps from India because we need to strengthen our drainage capacity,” Minister Mustapha said.
The Hydromet Department’s daily weather update urged citizens to take the necessary precautions noting that with the current forecast conditions, flash flooding and flooding are very likely over low-lying and flood-prone areas. The advisory also said that in areas of thundershowers, heavy winds and possible lightning strikes can be expected.
Earlier this month, the Hydromet Department issued an advisory forecasting wetter-than-usual rainfall conditions across all regions of Guyana for the months of November 2022 to January 2023 (Guyana’s secondary rainfall season).
The advisory predicted that the usual secondary rainfall season will be augmented by persistent La Nina conditions during the season and that rainfall is expected to increase considerably from mid-November and continue at least to January 2023.
During the upcoming rainy season, water levels in conservancies, reservoirs, and inland rivers across Regions 1 to 8 and 10 are likely to increase with a high risk of flooding. On the other hand, Region 9 would continue to be dry but can expect more than the usual amount of rain days. The highest amount of rainfall is projected for Regions 1, 2, 3, 7, and Northern 8 with increasing concerns for Regions 4 and 5.