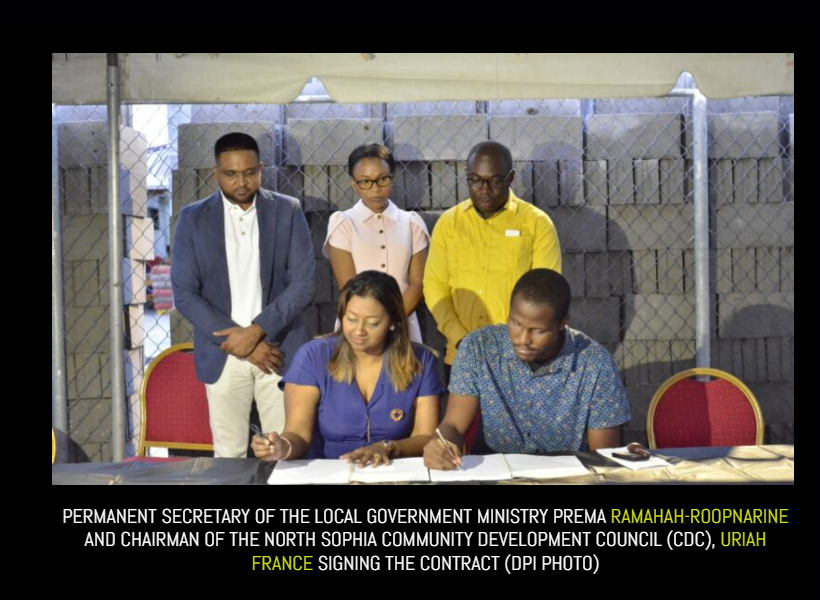 In keeping with the government’s commitment to providing employment opportunities for all, the Ministry of Local Government and Regional Development signed a $13.6 million contract with the North Sophia Community Development Council (CDC) to develop a community centre.

Permanent Secretary of the Local Government Ministry Prema Ramahah-Roopnarine and Chairman of the CDC, Uriah France signed the contract at the North Sophia playground, Friday afternoon.

The execution of the project will be undertaken solely by members of the community with supervision from the ministry. Labour and materials will also be sourced from within the community.

Local Government Minister, Nigel Dharamlall while delivering remarks, said part of President Dr Mohamed Irfaan Ali’s vision of ‘One Guyana’ is to ensure everyone benefits from the support of government including employment opportunities.

Apart from the construction of the centre, persons will be employed as community enhancement workers shortly.

“People must also benefit in terms of the employment landscape. In North Sophia and many other communities, we have quite a lot of unemployed people or underemployed persons.  So, we would like Mr. Chairman that quite a lot of these youngsters within the community, whether male or female that you are contracted, you’re given a job on this project, you’re going to be paid,” Minister Dharamlall stated.

He noted that this is the biggest government investment that will be executed at the community level and the CDC must provide the government with names of persons who are employed on the project.

“It can’t be people from outside the constituency, it got to be people from this area and I am sure they have a lot of skilled people as well as people who deserve to work,” the minister pointed out.

Minister within the Office of the Prime Minister with responsibility for Public Affairs, Kwame McCoy in his remarks described the signing of the contract as ‘significant’ and demonstrative of another commitment fulfilled by the PPP/C Government.

During past outreaches to the community, residents raised the need for a community centre to be established for the younger generation to benefit educationally and socially.

Minister McCoy iterated the government’s commitment to the development of every Guyanese.

Meanwhile, the chairman of the CDC commended the government for delivering on its promiseand assured that everyone will be involved in the execution of the project.

France urged members of his community to come and work together and do what’s best for the development of their community.