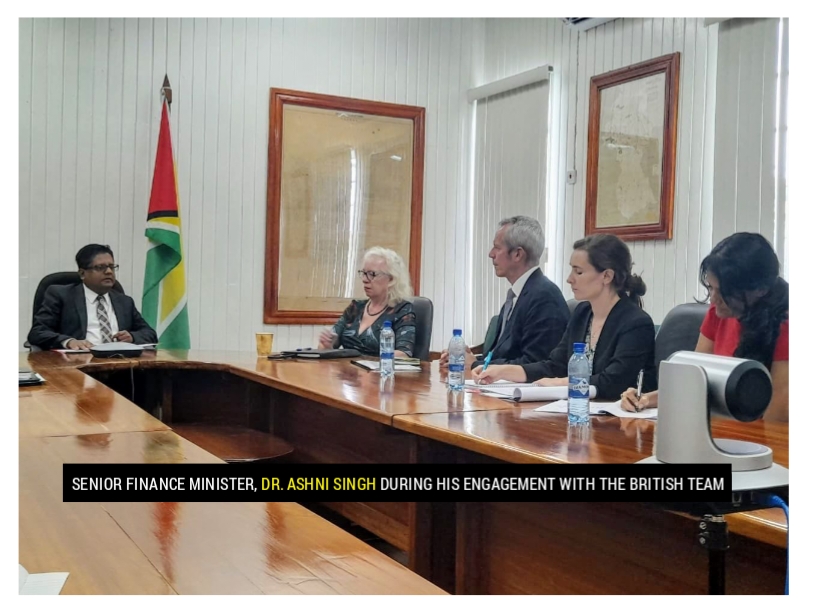 Though it is the government’s intention to use a portion of the oil revenues for its development agenda, Senior Finance Minister, Dr. Ashni Singh outlined on Monday that the administration will still maintain and pursue, a healthy mix of international aid.

He made this position clear during discussions with Development Director for the Caribbean, Foreign, Commonwealth, and Development Office and UK Director to the Caribbean Development Bank Malcolm Geere. Present as well were Economics Adviser and Team Leader Liz Brower and British High Commissioner to Guyana, Jane Miller.

Apart from its introductory purpose, the meeting served as an opportunity for the British team to discuss with the Senior Minister, how the United Kingdom could partner with Guyana to increase the mobilization of development support as Government continues to forge a number of international partnerships to catapult its current development agenda.

“Notwithstanding the commencement of oil production in Guyana and this illusion that there is windfall revenue, we still feel strongly about utilizing as much development support as we can,” Dr. Singh explained to the UK officials as he reminded that Guyana values its longstanding relationship with the UK.

The Senior Finance Minister explained that Government plans to ensure revenues earned from oil are used to lay the foundation for the future. Towards this end he said there would be a great focus on agriculture; transport infrastructure; energy infrastructure; physical infrastructure such as roads, bridges, schools, and hospitals; and key investments in people to ensure they are adequately equipped with the skills needed to meet new demands.

Dr. Singh also noted that government intends to fully capitalize on its Low Carbon Development Strategy (LCDS) and will continue to manage Guyana’s tropical rainforest in a sustainable manner in order to be compensated by the world for its forest conservation and clean air contribution.

Guyana and the UK have been collaborating on a number of development projects with recently the UK Caribbean Infrastructure Fund providing US$66 Million toward the US$190 million Linden to Mabura road project. The two-lane highway between Linden and Mabura Hill forms part of the arterial link between Linden and the Lethem Highway and links Georgetown to the Brazilian border. Additionally, through the UK Export Finance (UKEF) the Government of Guyana is constructing a Pediatric and Maternal Hospital. The building and equipping of the state-of-the-art hospital will cost 149 Million pounds.

Meanwhile, Cooperation programmes/projects between Guyana and the UK also include the Diamond Diagnostic Centre, the Lethem hospital, the Leonora Cottage Hospital, the Mabaruma Hospital, and the Paramakatoi Hospital. Through collaboration between the two countries as well, earlier this month Guyanese have been able to visit the UK visa-free.