The Guyana National Bureau of Standards (GNBS) on Wednesday, November 30, 2022, opened the doors of its brand-new sub-office in the town of Mabaruma, Region One (1) – Barima-Waini.

The modernised and expanded facility which was built in the Regional Democratic Council’s Compound, will better enable the GNBS to provide its core services to the residents of the remote region.

Delivering her remarks at the opening ceremony, Executive Director (Ag) of the GNBS, Ramrattie Karan, highlighted the services to be offered to the residents through the Mabaruma office includes verification of measuring instruments, product inspections, training and technical assistance for businesses.

According to Karan, “these services will all businesses in the region to be competitive.” The GNBS ED (Ag.) also thanked the Regional Administration and the Business Community for past and future support.

Public Relations Officer of the Mabaruma Chamber of Commerce & Industry (MCCI), Trevor Rupan who also addressed the ceremony, stated that the establishment of the office in Region 1 is welcomed; one which will positively impact the products produced by businesses.

Meanwhile, the Mayor of Mabaruma, His Worship Chris Phang welcomed the GNBS to the town. He advised that the services to be provided by the office is directly related to the Government’s vision. “With the rapid development experienced we must safeguard the interest of consumers which the GNBS can provide, and I am happy that Mabaruma is not left lout of the developmental drive led by his Excellency Irfaan Ali,” the Mayor added.

Regional Chairman, Brentnol Ashley in his remarks said “…Region one is on the verge of better heights. Once the right services are in place, development will happen at a faster rate.”

The Regional Chairman said that the new GNBS Office demonstrates a commitment to the ‘One Guyana’ initiative and he is delighted that the Ministry of Tourism, Industry and Commerce is setting the pace of providing Government services to the Region through standards.

Attending the opening ceremony was the Director of Business, John Edghill who proudly stated, “the work of the GNBS holds well for the Government.”

He acknowledged the extreme growth of Guyana’s economy and advised that it must transcend across the Regions of the country. Meanwhile speaking to the business community, he advised that it is better to build capacity through services like those provided by the GNBS rather than to try to get small financing through grants, etc. 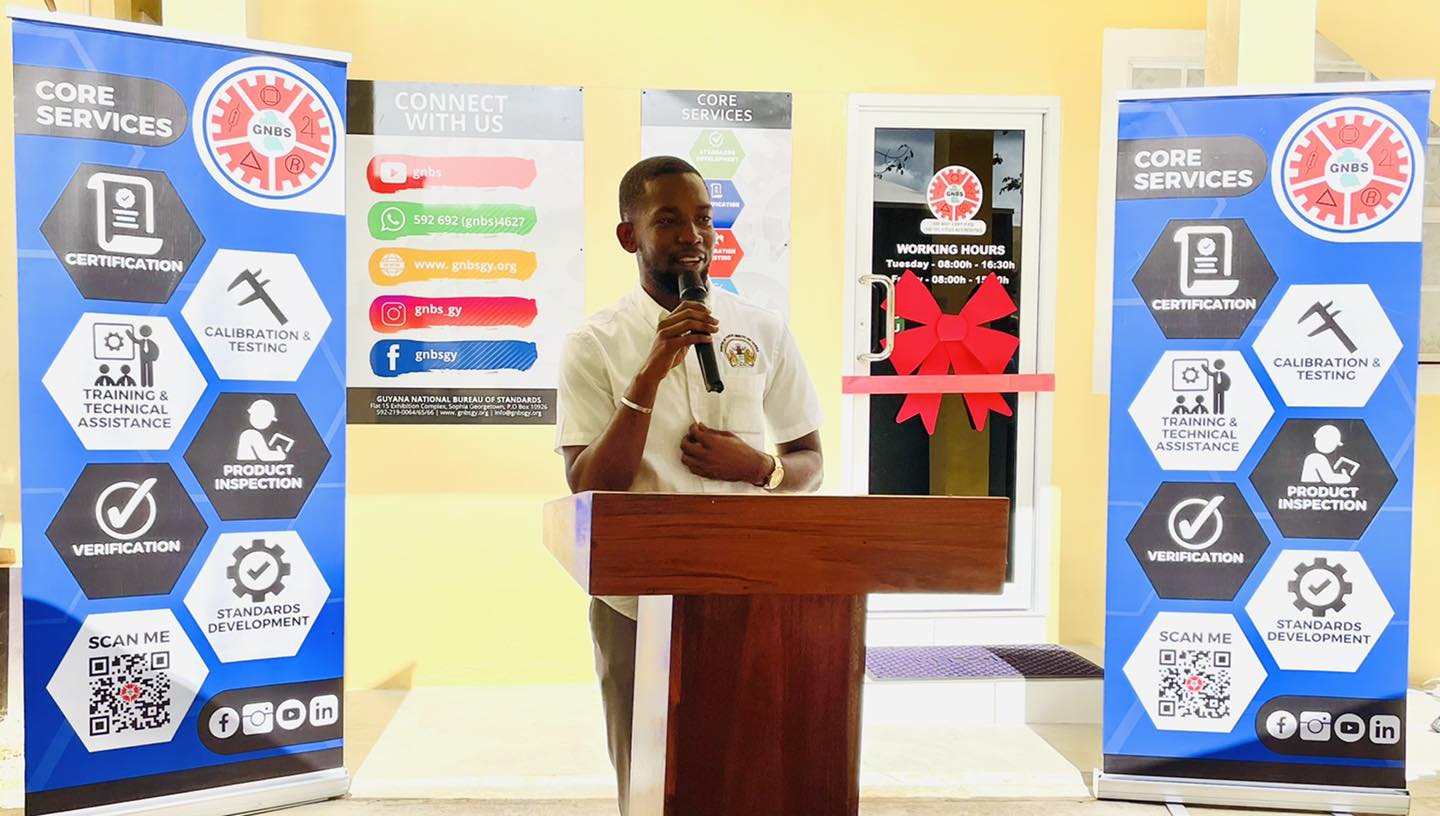 “Services provides to these businesses will make them competitive and sustainable in the long run,” he explained.

Finally, the Director of Business encouraged the local Authorities to support the work of the GNBS.

The Regional Executive Officer, Tikaram Bissessar committed to offering support to the officer stationed of the GNBS Office to provide transportation and other resources required to visit the other sub-districts in the Region.

While in Mabaruma, the visiting GNBS Team also held several meetings with stakeholders including the Mabaruma Town Council, the police, the Regional Administration, and the Mabaruma Chamber of Commerce and Industry to discuss mutual concerns and areas for collaboration. Further, a school lecture was conducted students at the North West Secondary School and an interview was conducted with Radio Mabaruma 95.1FM to create awareness of GNBS and its services in the region.

Stakeholders needing to contact the GNBS Mabaruma Office can call: +592-690-8032 to speak with Inspector, Johnathan Peters.