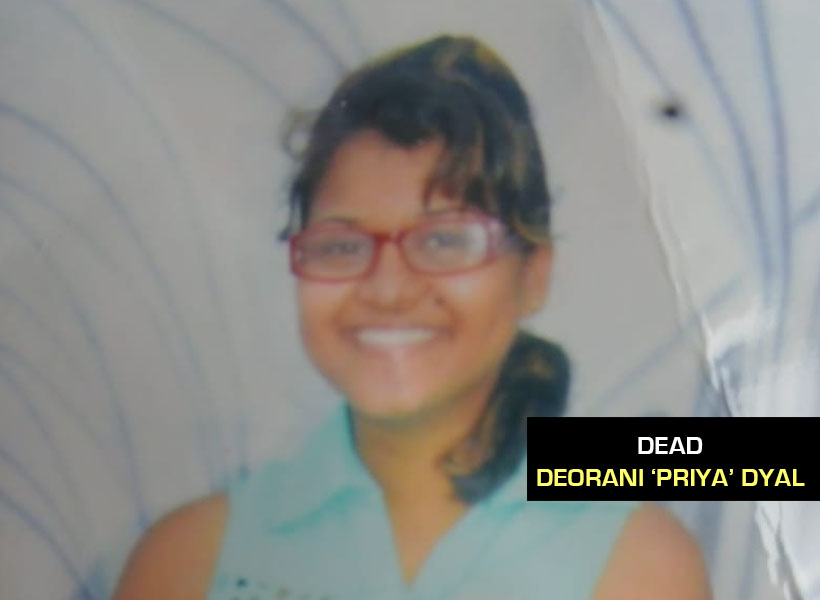 The small farming community of Hope Low Land, East Coast Demerara (ECD) is still coming to grips with the brutal murder of a 20-year-old woman, whose husband and killer later ingested poison.

Around 09:30 hrs this morning (May 25, 2018), Ramlall allegedly stabbed his reputed wife, Deorani ‘Priya’ Dyal about 20 times about her body at their Lot 123 Hope Low Land home before escaping from the scene. He was subsequently arrested a few villages away.

Dyal, the mother of an 18-month-old baby from a previous relationship was rushed to a private hospital in Nabacalis, ECD, where she succumbed to her injuries.

The police said that the suspect moved out about two weeks ago but back to the woman’s home around 09:00 hrs this morning. Shortly after, neighbours reported that they heard the woman screaming and when they responded, she was found in a pool of blood.

The victim’s sister, Sanita Dyal said that the suspect, who is a fisherman, moved in with her sibling a year ago in their father’s home. The woman said that she was not aware the couple had domestic issues.

However, Sanita said that she learnt two weeks ago that the mother of one and her partner had split and when she enquired, she was told that the 28-year-old man does not work to take care of the home.

“She said that daddy has to mind them and that he (suspect) not working. She said that he does left morning to go sea and go home back because he didn’t want to work, and when she talk he does vex,” the older Dyal indicated.

The woman added, “Priya said two weeks ago, she said that he (suspect) come and tell she he moving out and leaving her for good.”

The man never returned until this morning when he killed the young mother and consumed a poisonous substance.

Recalling what transpired this morning, the older Dyal said that she was at home when she received a call that her sister’s reputed husband was stabbing her. She said that by the time she reached to the scene, she was told that her sibling had died.

“Neighbours said that he come, gone in the house and start lock up all the doors. He carry two knives with him and start stab she up and she hollering for help but no one could have helped her because the doors were locked,” the woman said.

She added that neighbours informed her that at one point, her sister managed to run out to the upstairs verandah but the suspect held onto her hair and dragged her back into the house.