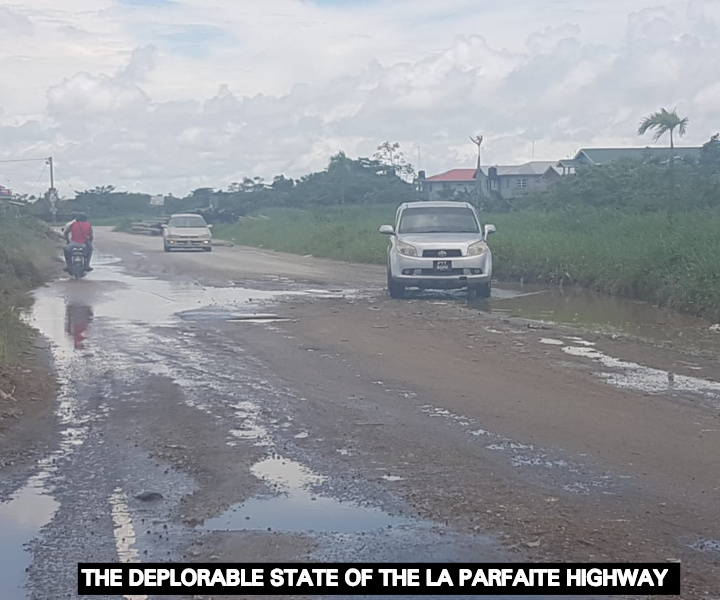 The four-year-old $605M La Parfaite Harmonie Highway/Access Road, on the West Bank of Demerara, is once again crumbling.

Within the last few months, the link has developed potholes with drivers, commuters and residents pleading with the relevant authorities for immediate intervention. Thus far, the situation has only worsened with the lack of adequate lighting and the existence of surface water.

There are numerous potholes, with the largest being at least 10 feet wide and four inches deep. Adding to the deplorable condition is the massive chunks of mud being left behind on the thoroughfare by the tractors that utilise the link to gain access to the large expanse of rice fields located in the Schoonard/Goed Fortuin area.

Media reports have indicated that the road would have been rehabilitated three times with the installation of speed bumps being the latest intervention following the tragic death of 25-year-old, Alana Da Silva, back in February of this year.

On all three occasions, the rehabilitation works were executed free of cost by one of contracting firms, Gaico Construction. It is still unclear if the company will shoulder the expense of another rehabilitation, given that the defects liability period has expired. BK International would have working in conjunction with Gaico Construction in completing this government-funded project.

The highway was opened to vehicular traffic on September 6, 2014. It was commissioned by the former President of Guyana, Donald Ramotar, and former Minister of Housing and Water, Irfaan Ali.