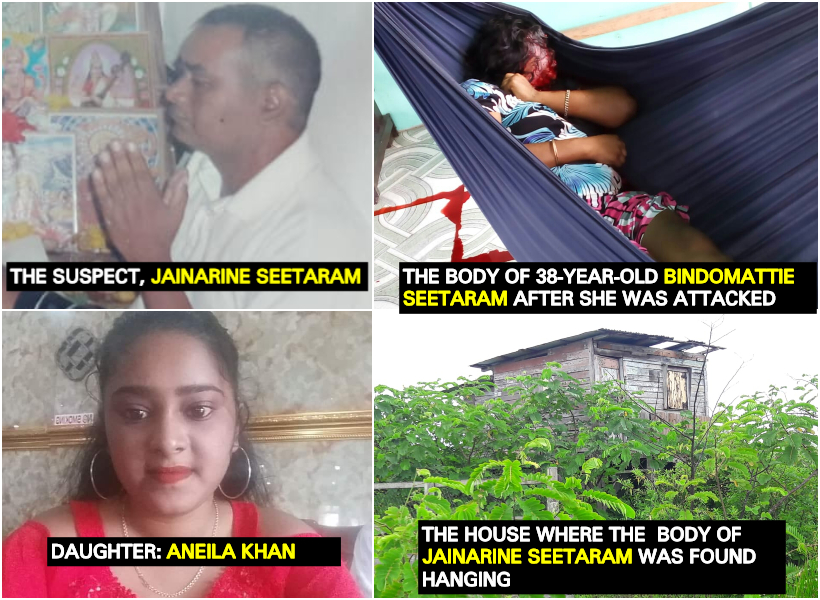 A 41-year-old father went on a murderous rampage today (June 6, 2018); slitting his wife’s throat before bashing his daughter’s head several times with a hammer at their Glasgow, East Bank Berbice home.

The incident occurred shortly after 10:00 hrs.

The couple’s 10-year-old son, Arun Seetaram, survived the attack by escaping to his grandmother’s home.

The suspect, identified as Jainarine Seetaram, was later found hanging from a rope in an abandoned house a few streets away from the scene.

According to reports reaching the Guyana Standard, the couple had an argument during which the suspect went berserk, armed himself with a hammer and a knife and began his assault. He reportedly struck his wife twice to the head with the hammer before slitting her throat.

The woman, who was lying in a hammock at the time of the attack, did not get a chance to fight for her life. She died on the spot.

The Guyana Standard was informed that when the couple’s children heard the screaming from the upper flat of the two-storey building, they ran downstairs to enquire.

At this point, it is believed that the father of two grabbed the 21-year-old on the step and dealt her several hits to her head with the hammer.

The 10-year-old, who recently wrote common entrance, managed to escape from his father. His sister, however, died while being transported to the New Amsterdam Hospital.

While neighbours heard the screaming, they did not realize the severity of the attack. They claimed to have seen the 41-year-old man when he escaped from the scene.

While it is unclear what the couple was arguing about, it is suspected that the 38-year-old woman was demanding that her husband, who had been unemployed for the past two years, find a job.

Relatives who were present at the scene said that the family was dependent on overseas help and their daughter’s spouse, who resides in the United States of America.

“He was very lazy. Since he left his job as a security guard at the cement company, he never worked back and every time his wife talk to him about working, he making all excuses. From his foot to his belly…everywhere hurting,” a relative said.

The couple’s son was too devastated to speak to media operatives. He was also unable to provide a statement to the police.

Neighbours and relatives described the suspect as a quiet individual, who went to Church with his family frequently.