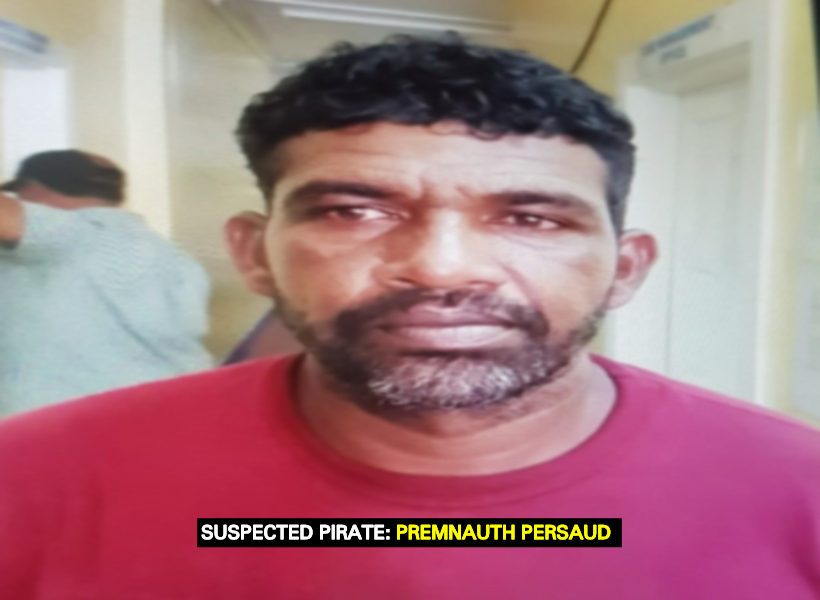 Ranks from the Guyana Police Force (GPF)’s Major Crimes Unit picked up a 42-year-old man from his Berbice home Tuesday night (June 05, 2018)— more than a month after a deadly pirate attack in Suriname waters.

The attack has left 11 Guyanese fishermen missing and four dead.

One of the pirates, who has since been charged, has allegedly identified Premnauth Persaud as the man who recruited pirates to slaughter as many fishermen as possible on April 30, last.

Persaud, who is being interrogated at the Police’s Criminal Investigation Unit (CID), has since denied any involvement in the crime, which is reportedly linked to two separate revenge plots dating back to February last.

According to information received, Persaud’s employer, Nakool Manohar, instructed him to recruit pirates for the deadly attack. It was Persaud who allegedly gave all the instructions to the killers.

“We are hearing that he (Persaud) killed and chop the most fishermen and when them rest (pirates) ain’t attacking, he cussing and threatening them,” a police source in Berbice said.

Nakool Manohar is the brother of Somnauth Manohar, who was executed in his yard in Paramaribo, Suriname.

Persaud, who worked with both brothers, was present when Somnauth was killed and he too was shot once to the foot.

According to information received, Somnauth Manohar and a gang of fishermen reportedly attacked a fishing vessel in Suriname, killing the captain in February 2018.

It was then reported that friends, co-workers and relatives of the dead boat captain got together and hatched a plan to execute Somnauth, who is said to be a known pirate in neighbouring Suriname.

In retaliation, a month after Manohar was murdered, his brother, who resides in Guyana, then plotted with a gang of fishermen, who worked with both him and his deceased brother, to kill as many fishermen as possible.

Nakool Manohar has since been charged in Guyana for the piracy attack and murder of the fishermen. Additionally, the Suriname authorities charged 15 pirates, who commit the crime.

The police have received information that both Manohar and his brother have been attacking fishermen for years. Most of the attacks occurred in Suriname waters.

“The two brothers are pirates and their father was a pirate. All their wealth comes from piracy. Because they so popular, every time a boat gets attacked, the police does go and pick them up…If they didn’t do it, then they know who did it,” a police source said.

During the investigation, it was found that Nakool Manohar owned 40 fishing boats with each valued at US$40,000.

“He is a fisherman and he is in his 30’s. Fishing work doesn’t give you so much money,” a rank said.

The five survivors would have helped the authorities to identify the pirates.