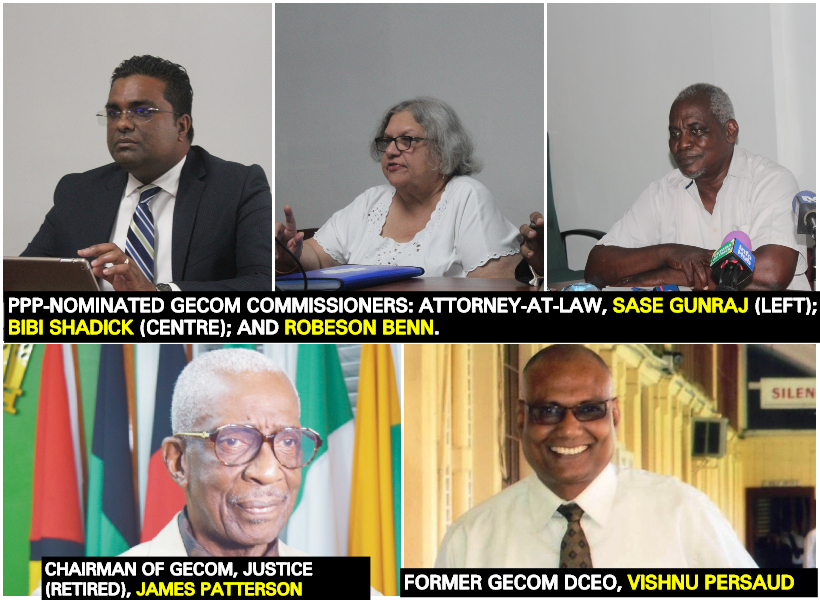 The political opposition is of the firm view that the non-reappointment of the Deputy Chief Elections Officer (DCEO) of the Guyana Elections Commission (GECOM), Vishnu Persaud was due to race.

At a press conference held at the Leader of the Opposition’s Office on Church Street, the three GECOM officials revealed that it was Chairman of the Commission, Justice (Retired) James Patterson, who cast the deciding vote supporting government-nominated commissioners today.

Both Benn and Shadick, told media operatives at the hastily-organised press conference, that the decision to choose another person over Persaud was “clearly” done on the basis that he was Indo-Guyanese.  They opined that the person who was picked for the position is an Afro-Guyanese.

Shadick postulated that this appeared to be somewhat habitual for Commissioners of the government. She also spoke of the “unbalanced” ethnic composition at GECOM, saying that it was a reason for concern.

But the Opposition Member later contradicted herself, saying that she and her fellow colleagues cared not about race, but rather, the issue of equality. In this regard, she said that Persaud would have served three years as the DCEO, but was forced to vacate the position after his three-year contract came to an end.

Benn noted that it would have been feasible to reemploy Persaud given his untainted record at GECOM.

“His (Persaud) appraisal was good. He should have been chosen as the DCEO…A fair and rational decision could have been made,” Benn opined.

The Former Public Works Minister argued that Persaud was overlooked despite his scores came back higher than the “favoured” candidate. In support of her colleague, Shadick pointed out also that Persaud is more qualified for the job given that his academic achievements are related to works being done by GECOM.

“The other candidate has a Masters (Degree) in gender equality,” she said

The Commissioners have indicated their intention to raise the issue with the Ethnic Relations Commission (ERC) and with other “international” bodies.  A letter is expected to be sent to the ERC tomorrow (June 13, 2018).

Quizzed on whether there was an unbalanced ethnic composition at the entity prior to the change of government in May 2015, Shadick said that she cannot say because her appointment as Commissioner was done four months after that electoral process was held.