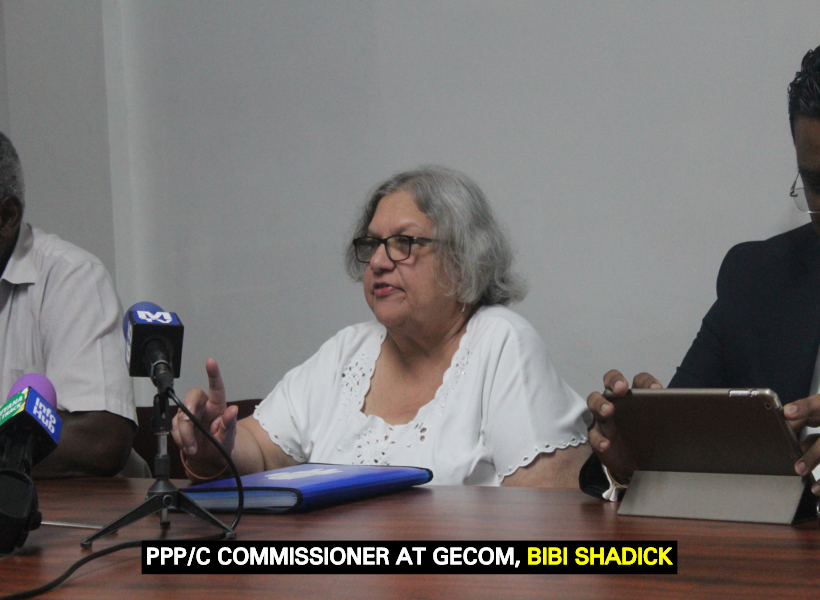 Opposition-nominated commissioner of the Guyana Elections Commission (GECOM), Bibi Shadick is contending that the “unbalanced” ethnic composition at the agency, is affecting its work.

The former People’s Progressive Party/Civic (PPP/C)’s Member of Parliament (MP) yesterday (June 12, 2018), told media operatives that the electoral oversight body is lopsided; consisting mainly of one race. This she said, is of great concern especially when it comes to the issue of equality.

Shadick and her fellow PPP/C commissioners were at the time condemning actions taken by the GECOM Chairman, Justice (Retired) James Patterson, in casting the deciding vote to nominate an Afro-Guyanese candidate over an Indo-Guyanese, for the position of Deputy Chief Elections Officer (DCEO).

The PPP member was asked by the Guyana Standard if the “unbalanced” composition – as it exists – is affecting the work of GECOM, to which, she responded in the affirmative.

Seeking to solidify her stance, the PPP member noted that a meeting was conducted with all the managers of GECOM because of the realisation that the systems at the entity were broken.

“So they were called there to be told what is expected of them…We told them ‘you’re system is broken and you need to fix it’ so no, the system is not working properly.” Shadick argued.

The PPP Commissioners are expected to send a letter to the Ethnic Relations Commission (ERC) today, outlining their concerns.