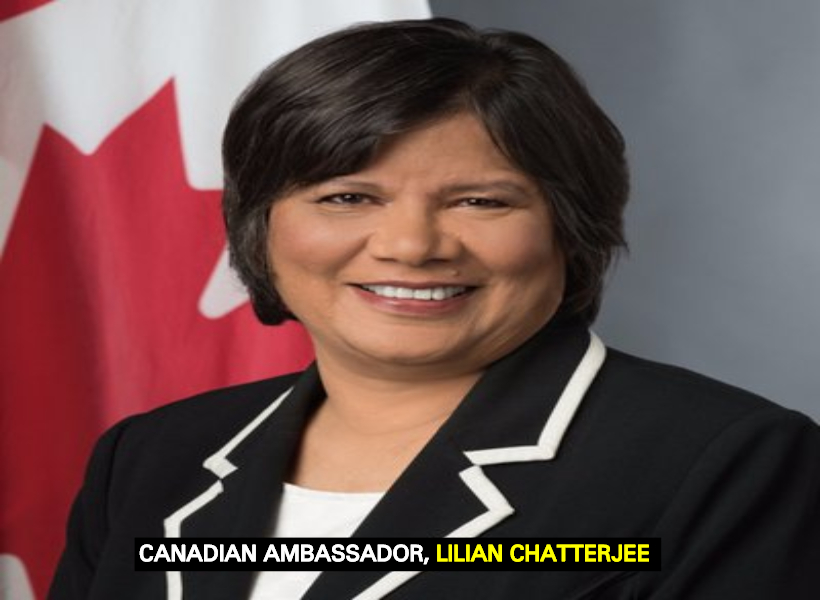 Facebook
Twitter
Google+
Pinterest
WhatsApp
Canadian Ambassador to Guyana, Lilian Chatterjee says that her country’s interest in Guyana goes beyond the budding oil and gas sector.
During the launch of three trade councils yesterday by the Georgetown Chamber of Commerce and Industry (GGCI), the diplomat told attendees that since before the discovery oil and gas, Canada has been at Guyana’s side.
“In fact, Newfoundlanders will tell you that they’ve been trading with you for hundreds of years. They’ve been trading their cod (fish) to you and getting rum in return.”
Acknowledging Guyana’s potential for trade, the Ambassador sought to solidify her notion by conveying how deep the trade relations between the two countries go.
“In 2016, Guyana was Canada’s largest trade merchandise partner in the Caribbean Community (CARICOM) and in 2017, that trade merchandise was valued at approximately $700M.” She said.
The Ambassador added that within a few years, several partnerships would have been signed between the Canadian private sector, and Guyana’s.
The envoy said,“GCCI was (apart of ) the first Memorandum signed (with) Newfoundland Environmental Association (NEA) and since then, we’ve had six partnerships signed.”
Ambassador Chatterjee said, too, that two “very high-level deputy ministers” will be coming from Newfoundland next week to meet with State Minister, Joseph Harmon; and the Minister of Business, Dominic Gaskin.
This visit is geared at furthering the preparatory work on a Memorandum of Understanding ( MoU) that is expected to be signed between the Minister of Natural Resources of Newfoundland, and the Government of Guyana in September.
Another trade mission of Newfoundland’s private sector will be conducted in that month as well.