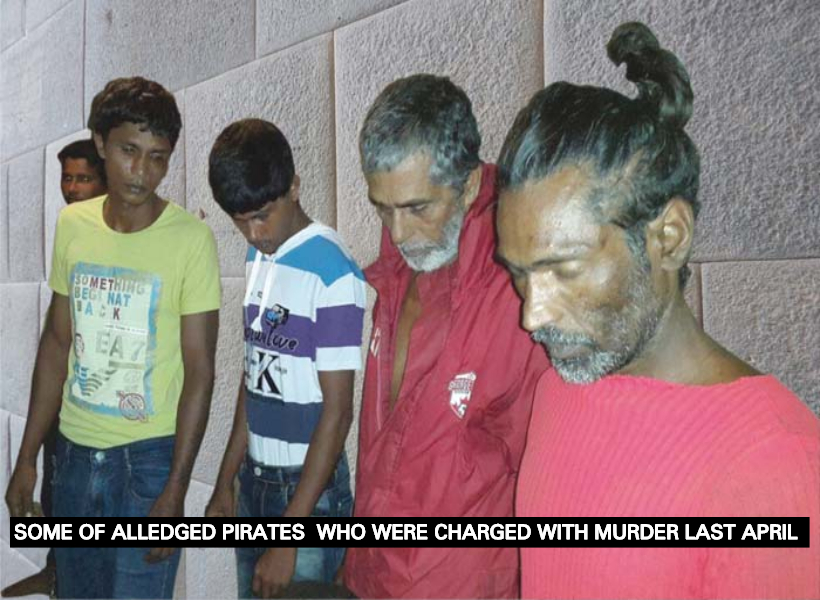 Addressing the issue in his weekly column titled, “Piracy: Participation and Punishment,” Nagamootoo noted that offences at sea carry penalties which include life imprisonment for hijacking, that is, taking away or attempting to take away another person’s boat. The same jail time applies for piracy which involves illegally detaining a boat in a river or on the sea; or participating in the operation of a pirate vessel.

The Prime Minister noted that a person who attempts to cover up a piracy attack which led to someone’s death can get a minimum sentence of 10 years imprisonment. Nagamootoo further indicated that death by hanging is applicable for murder on a vessel during an armed robbery, hijacking or piracy.

So far, the alleged mastermind and two other suspects in the April 30 last piracy attacks have been charged in Guyana.

Early this month, when ranks were preparing to charge the suspects, questions were raised as to whether the men could be charged in Guyana given the fact that the crime took place in neighbouring Suriname.

To answer this, the prime minister said, “The answer is found in the provisions of the Hijacking and Piracy Act (2008).  Though committed in another country, the law says it is to be treated as if they were done within Guyana or its territorial waters.”

In other words, Nagamootoo said that the Guyana Police Force can charge the alleged pirates.

The PM boasted that there has not been a single act of piracy or hijacking in the country for the year thus far.

He said that while there were 10 reported cases in the Waini River, in the border area with Venezuela, the attacks were committed on gold miners by suspects believed to be part of the Venezuela-based gang, ‘Sindicato.’

“It has always been a challenge for Guyana to monitor its vast coastline that stretches for 270 nautical miles from Morawhanna at the mouth of the Barima River, to Corriverton in the mouth of the Corentyne River,” Nagamootoo related.

He said that his government is focusing on border security which includes monitoring maritime areas.

The Guyana Standard was informed that the Maritime Wing of the Guyana Police Force, the Customs and Anti-Narcotics Unit (CANU) and the Guyana Defence Force have coordinated patrols by boat and air to protect the country’s food-based economic activities, combat trafficking of illicit drugs, fuels and other contraband, and to protect state revenues.