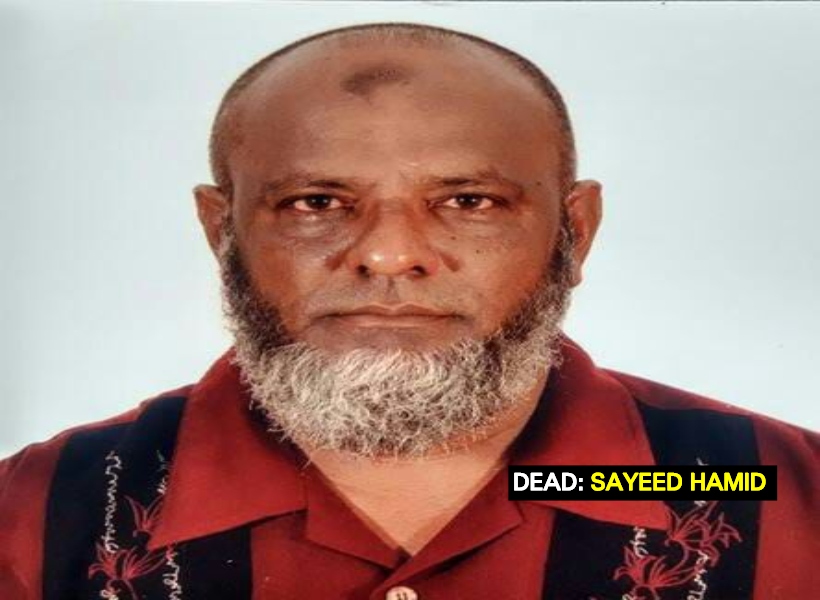 On Friday, the burnt remains of 56-year-old Saeed ‘Sayo’ Hamid, who went missing on April 18 last, was found buried in the backyard of a Hindu temple at D’Edward Village, Corentyne Berbice.

The 56-year-old man reportedly left his home at Lot 41 Queenstown, Corriverton, Berbice and informed a relative that he will be back to prepare dinner.  Days after Hamid was reported missing, police received information that he was seen entering a white car at the Palmyra bridge entrance on the night he left home.

He was allegedly seen in the company of someone matching the description of one of his alleged killers. Detectives in Berbice were able to track the missing man’s phone and discovered that he was in contact with Satrohan Madray who was released from prison last year.

Madray, who was picked up for questioning, confessed to killing Hamid. He led ranks to his accomplice, Antonio Balrup. Both men claimed that they bludgeoned Hamid to death and burnt his body before burying his remains in a shallow grave behind the temple. Madray also confessed that he is the owner of the temple. On Friday, the suspects led investigators to the scene.

Detectives say that the elderly man’s death was allegedly plotted by Hamid’s 24-year-old son, Asif, who was charged in 2015 with the murder of Henry “Beminal” Lalman, 78, of No. 36 Corentyne, Berbice. The cattle farmer was killed sometime between July 27 and 30, 2015 and buried in the suspect’s backyard.

It is suspected that the 24-year-old butcher killed the elderly man after he (deceased) went to his home to collect money that was owed to him. The murder suspect allegedly purchased meat from his victim to run his butchery.

For Lalman’s murder, the suspect’s father was the key witness and he was scheduled to testify a few days after he vanished.

Guyana Standard was informed that the police have evidence—indicating that young Hamid hatched a plan with his friend, Madray to have his father killed so that he could not testify.

Police sources say that the murder plot against the 56-year-old man was planned a few months ago while Madray was in prison.

“What we have is a confession but they are not giving much detail. We believe that Hamid and Madray planned the murder in prison and when Madray came out, he recruited his friend, Balrup, who he would have met in prison,” a police source said.

The police believe that Hamid’s his son must have provided his alleged killers with a plan to lure him to his death.

Madray was accused of bludgeoning his friend, Dinesh Harrylall of 38 B Woodley Park, No. 11 Village, West Coast Berbice, on February 17, 2014. He was freed in October 2017 following a not guilty verdict.

Balrup, on the other hand, was accused of murdering a 64-year-old woman. His case was discharged following a no case submission by his attorney in 2015.