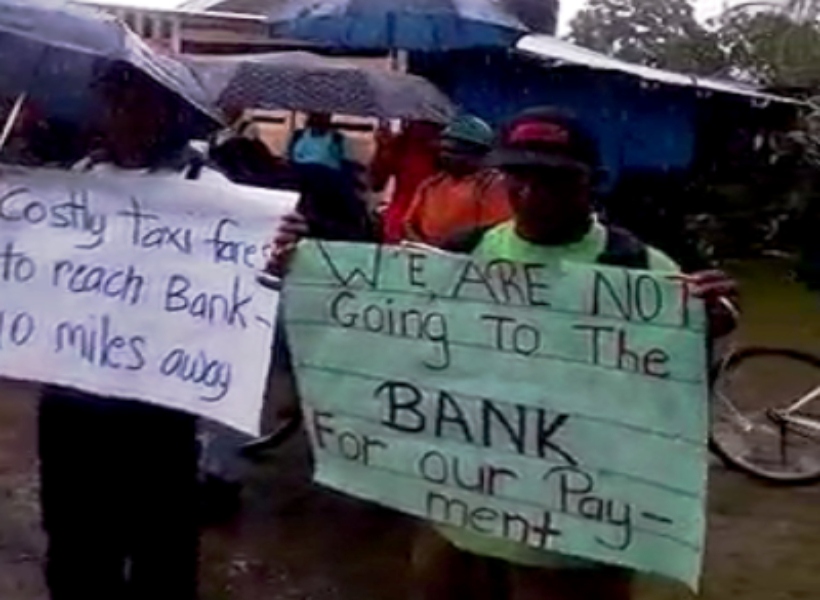 For years, the Uitvlugt Estate has been paying its sugar workers at nearby pay offices. But management wants to take a different approach to its payment system. It wants to pay the workers via local banks.

But this decision does not sit well with the labourers of the Estate. In fact, a protest was held earlier today on the matter.

The Guyana Agricultural Workers Union (GAWU), in a statement today said that the Guyana Sugar Corporation (GuySuCo) is insisting that “soon, they (the workers) will not be paid unless they submit their banking information to the estate.”

The Union said that the Corporation knows that withholding workers’ wages in an illegal act by itself.

The Union said, “The protestors indicated to GuySuCo that going in the direction they seek will place greater pressures on them. They informed the state entity that they will now be forced to expend several hundred dollars weekly in order to travel to the banks located at Vreed-en-Hoop and Parika to withdraw their wages. They worry too, that they may be forced to make more than one trip should ATMs be inoperable when they wish to engage in their transaction.”

GAWU said that other increased services will cost sugar workers more; adding that one bank recently increased its withdrawal fees.

“We want to believe, that the other banks may well follow suit. They related that with pay rates frozen in the sugar industry since 2014; lesser work opportunities; and a reduction in incentive payments, among other things, they can hardly bear the costs GuySuCo is asking them to fetch.”

Apart from those challenges, the Union said that pensioners and workers would have also expressed fear of being a robbed after they exit the bank. In this regard, GAWU used media reports of similar occurrences in recent times, to augment the workers’ claims.

In conclusion, the Union called on GuySuCo to do what is “right and decent” and pay the workers at their regular pay offices as they have been doing for a long time now.