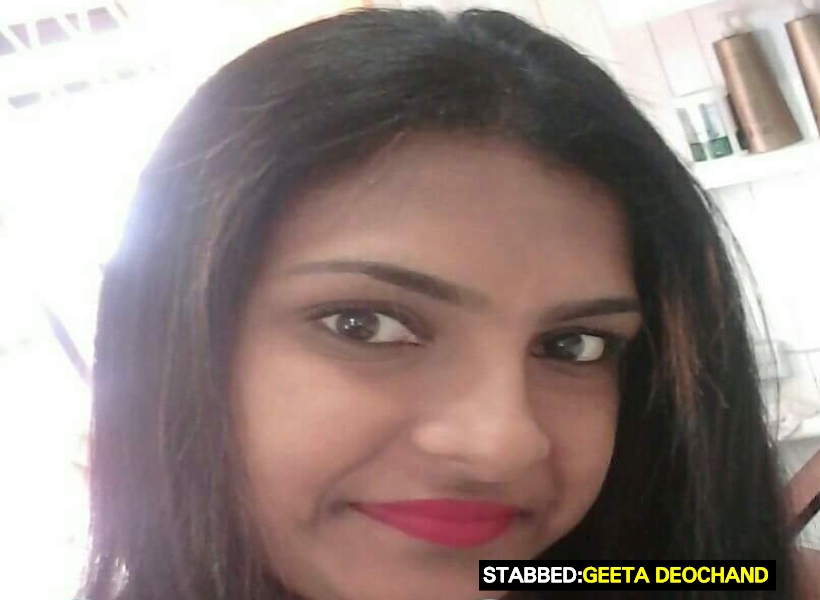 A mother of one was stabbed some 20 times about her body this morning for refusing to allow her estranged husband to kiss their three-year-old son. The incident happened shortly after 08:00 hrs at Sea View Street, Cornelia Ida, West Coast Demerara (WCD).

The victim has been identified as 27-year-old Geeta Deochand called “Pinky” of Lot 10 Cornelia Ida, WCD. Up to the time of publication, Deochand was in the theatre at the West Demerara Regional Hospital undergoing surgery.

The suspect, Rohan Singh, was arrested shortly after escaping from the scene.

According to information received, Deochand and her son were standing on the road this morning waiting on a minibus when her estranged husband showed up and starting playing with his son.

The Guyana Standard understands that the suspect picked up his son in an attempt to kiss him. But Deochand reportedly got upset and grabbed the child from his father.

The police said that an argument started, resulting in the suspect pulling a knife from his pocket and stabbing the victim. The woman was attacked in the presence of her crying son.

She was stabbed some 20 times to her face, neck, hands, chest, and abdomen.

A police source said that the woman’s relatives claimed that the child’s father had stopped contributing to his welfare since the pair separated almost a year ago. As such, Deochand was forced to take him to the court for child support.

The victim’s relatives believed that the suspect had planned the attack on the woman since she took him to court.

“The family said that he (suspect) was upset since she summons he and he would call and curse her on the phone all the time,” the source said.

Eyewitnesses told the police that when the suspect grabbed the 27-year-old woman and started stabbing her, he refused to free her. When he finally did, he fled the scene. The mother of one was taken to the hospital where she remains a patient.