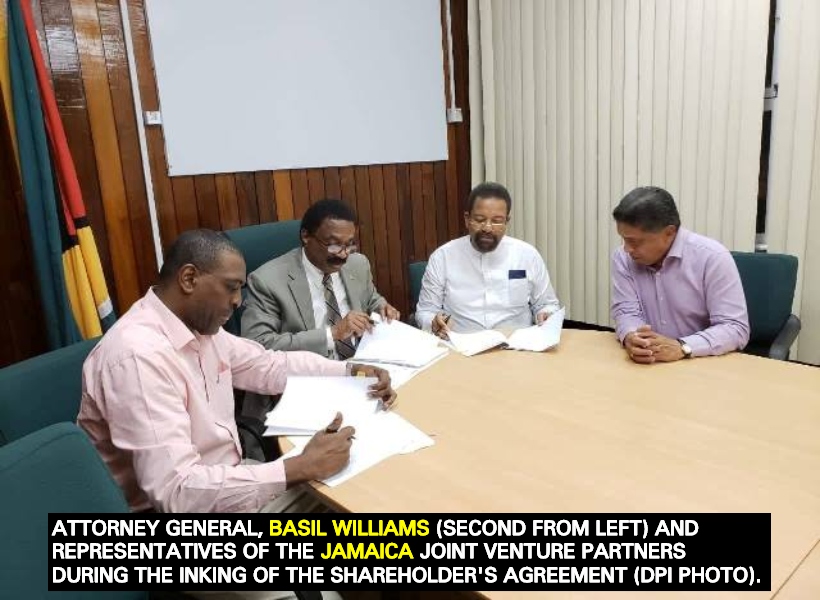 After more than two decades of lobbying for an alternative to the Norman Manley Law School in Jamaica, the Hugh Wooding Law School in Trinidad and Tobago and the Eugene Dupuch Law School in the Bahamas, Guyana is on its way to having its own law school.

Over the period of three days (June 18 to 20, 2018), the Minister of Legal Affairs and Attorney General Basil Williams, along with members of the local Joseph Haynes Law School (JHLS) committee, would have met with representatives of the Jamaica joint venture partners.

The visit was specifically aimed to finalize and sign the shareholders’ Agreement for the JHLS.

The representatives continued to meet, with the AG where the team worked relentlessly to ensure that the result was an agreement acceptable by all parties.

A Department of Public Information (DPI) report stated that after careful consideration and collaboration, the agreement was signed and witnessed by representatives of the parties involved.

The shareholders’ Agreement together with the Feasibility Study and Related Business Plan are expected to be submitted to the Council of Legal Education (CLE).

The JOF Haynes Law School is being established through a Public-Private Partnership between the Government of Guyana, the Law School of the Americas (LCA) and the University College of the Caribbean (UCC) and will add to the existing options available to holders of a Bachelor of Laws (LLB), and who intend to pursue their Legal Education Certificate (LEC).

Back in April, the local media reported that the Improved Access to Justice in the Caribbean (IMPACT Justice) in its final report following a survey of legal education in the Caribbean Community (CARICOM), recommended among other things, that law schools be established in Guyana and two other Caribbean states.