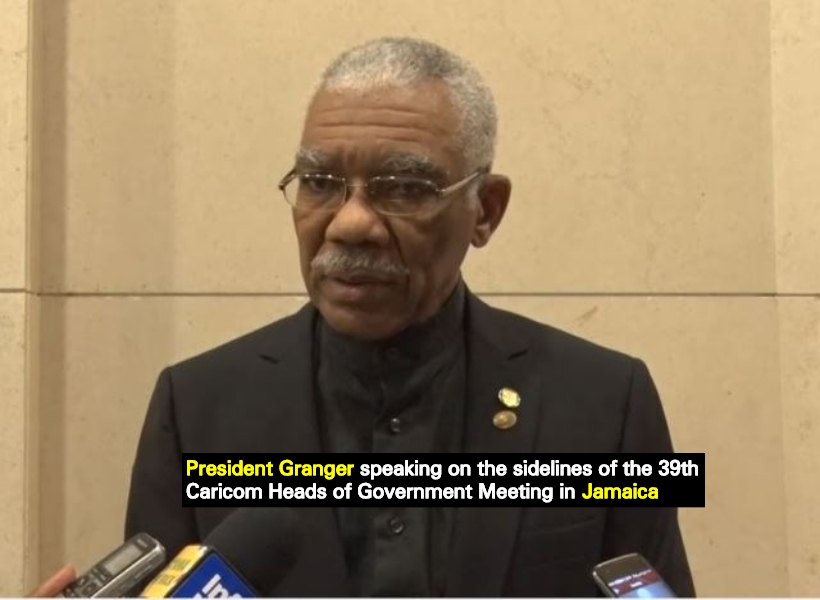 President David Granger is dissatisfied with the failure of the Caribbean Community (CARICOM) member states to implement decisions which ultimately impact the region’s dependence on extra-regional sources for food and other resources while preventing the exports of others from the region.

He expressed these sentiments at the 39th Meeting of the Conference of Heads of Government of CARICOM in Jamaica.

The Head of State said, “I am very disturbed that after such a long time, the Caribbean is not producing much more of the food it consumes on a daily basis. Honey is one of them, yes, but there are other products. Another country might be trying to export water and we find that the water is blocked, another might be trying to export stock feed. There is no fault in the CARICOM structure. There is no fault in the rules. I think there is a fault in the implementation.”

In addition to this, President Granger said that CARICOM as a regional body, and the 19-year-old Caribbean Single Market and Economy (CSME), are good for the region, but there needs to be less bureaucracy and more willingness to implement decisions taken.

Granger said, “The point I’m trying to make is that the decisions that we took are correct. The rules and the procedures we have established over the last 45 years are correct, particularly over the last 19 years or so that CSME has come in. It’s a question of bureaucratic will to implement those decisions. I don’t believe anything is wrong with the decisions.”

Granger is not the first to express dissatisfaction with this slow pace of implementation. In fact, his comments come on the heels of utterances made by the bloc’s Secretary-General, Ambassador Irwin LaRocque. The Ambassador said yesterday that the Region has not achieved as much as it should have by now.

(See link for that story:  http://www.guyanastandard.com/2018/07/05/caricom-heads-of-govt-meeting-secretary-general-bemoans-sloth-in-adoption-of-legal-instruments-major-policy-decisions/

LaRocque noted that major policy decisions and the adoption of legal instruments take way too long to be negotiated. This he said has to change.