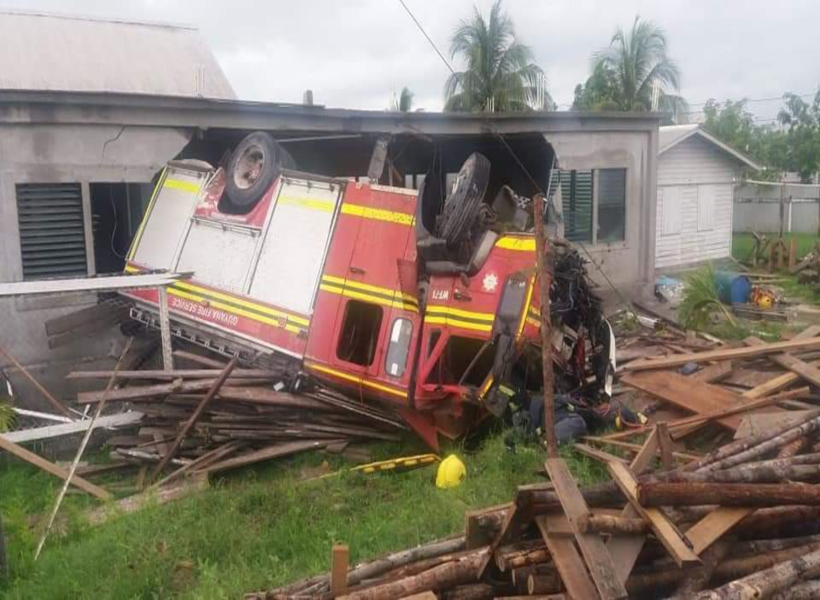 Five firefighters are counting their lucky stars following a near-death experience this afternoon at De Kenderen, West Coast Demerara (WCD). The fire truck, in which the men were travelling in, careened off the road and crashed into a daycare centre around 14:30 hrs today.

Thankfully, the daycare was under construction and no one was there at the time.

The injured firefighters have been identified as Adrian Benjamin, 24; Quinton Damon, 36; Errol Hyman, 42; Bryant Bobb, 20 and their leader, Troy Gravesande, 45. Gravesande was the driver. The men are hospitalized at the West Demerara Regional Hospital.

The police said that fire tender, PRR 1635 was returning to the Leonora Fire Station after responding to a fire at Parika, East Bank Essequibo when it veered off the road and crashed into the daycare. The firefighters were pulled from the truck in an unconscious state and rushed to the hospital. The truck was badly damaged.

The Guyana Standard has been informed that reckless driving could be the cause for the accident. A truck driver attached to BK International has reported to the police that the same fire tender caused him to crash into a utility pole around 13:00 hrs today on the Barnwell public road, EBE.

The truck driver claimed that he was heading to Parika when he noticed the fire truck overtaking him and approaching the minibus in the other lane head-on. To avoid a fatal collision, the driver said that he mashed his brakes to allow the fire tender to drive past him but his vehicle skidded and ended up colliding with the utility pole since the road was wet.

No one was injured. The driver claimed that the fire tender did not stop to render assistance.