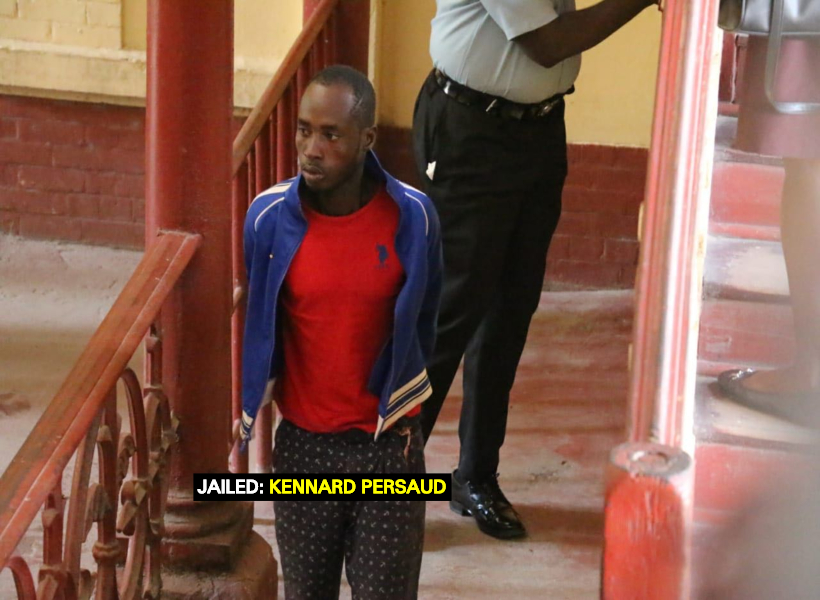 “You listen to me Madam; I rob the man because I am very frustrated because I’m not finding a job and my children were starving that night.”

Those were the words of a “contractor” who was sentenced to 50 months imprisonment by a City Magistrate for snatching a phone and a silver chain.

Kennard Persaud, 29, a father of three, appeared before Principal Magistrate Judy Latchman in the Georgetown Magistrates’ Courts this morning where the robbery charge was read to him.

The visibly upset man who spoke to the Magistrate in a loud and rude manner stated, “Listen I tek it! Me ain’t get time fuh waste. I ain’t able come to court steady steady. I had to buy dinner for my children.”

Facts presented by Police Prosecutor, Quinn Harris, stated that on July 6, last, the victim was in the front passenger seat of a route 44 minibus when he was approached by the defendant who relieved him of the articles mentioned in the charge.

The defendant then made good his escape.

The matter was then reported and Persaud was arrested and charged for the offence.

An identification parade was then conducted and he was positively identified as the person who robbed the victim. The stolen articles were recovered in his possession.

The Prosecutor also told the court that Persaud was previously sentenced to six months imprisonment for a similar offence.

Magistrate Latchman, before imposing the custodial sentence on Persaud, stated “Thou shall not steal. This is the second time you are being sentenced for stealing. You need to work hard for what you want. You did not learn your lesson the first time.”

Based on the fact that Persaud did not waste the court’s time and the need to prevent other from contemplating the commissioning of the offence, the Magistrate imposed the custodial sentence.