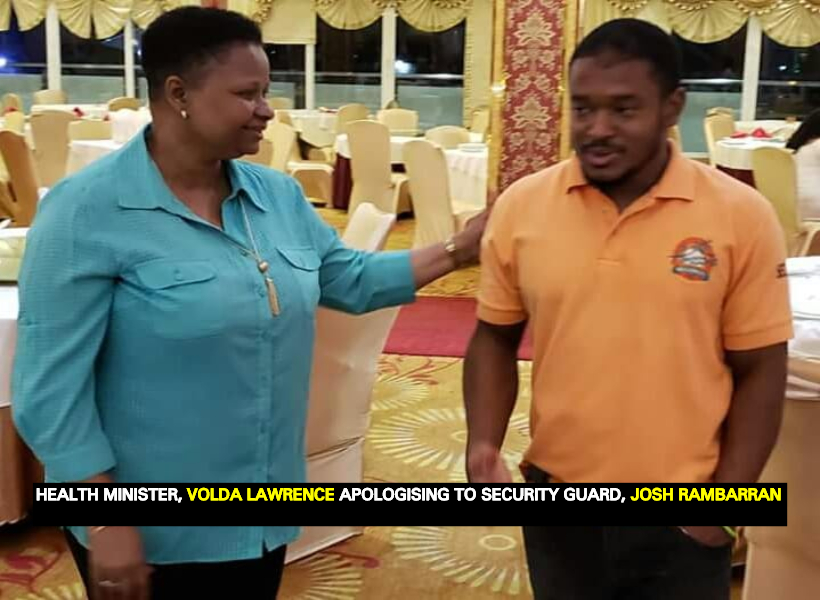 Having discovered that security guard, Josh Rambarran, was made to spend 16 hours at a police station after junior Minister of Natural Resources, Simona Broomes claimed that he aimed his gun at her; Minister of Health, Volda Lawrence offered the victim an apology.

Volda Lawrence met with the security personnel on Wednesday and apologized to him on behalf of the junior minister.

Lawrence said, “I met young Josh Rambarran at New Thriving Restaurant. He told me a story about what happened to him on Sunday last. According to him, he was wrongfully arrested and detained for 16 hours.”

She added, “From the bottom of my heart, I apologized to him and said I was sorry. Humility and wisdom are character traits we must always ask of our Creator.”

On Sunday night, Minister Broomes alleged that a security guard attached to a Providence, East Bank Demerara (EBD) establishment was very aggressive towards her after her driver tried to park in the compound. However, surveillance footage that was released by the security company contradicts the Minister’s story.

The footage did not show the security guard pulling a gun at the minister as she had previously claimed. Instead, the minister and her driver were seen throwing around signs and barricades when they were informed they could not park in the “No Parking Zone.”