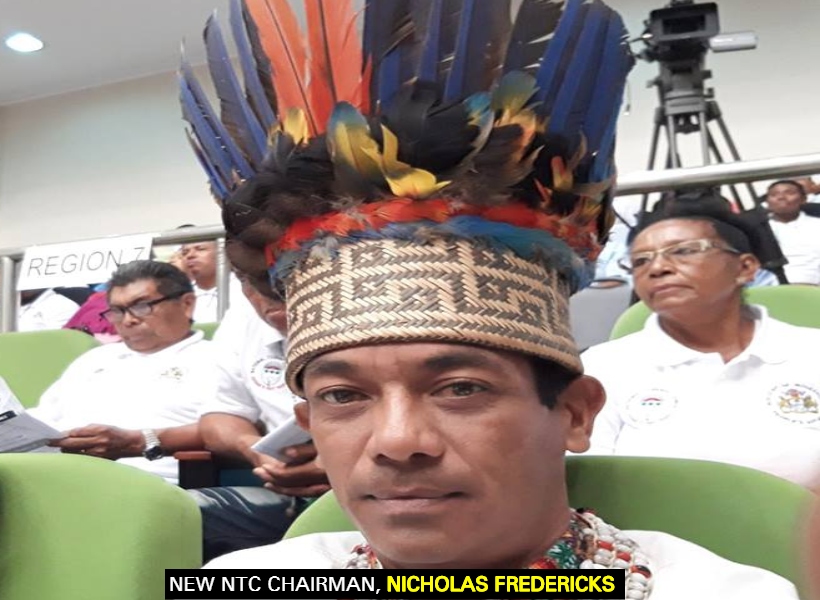 During the nomination process at day three of the NTC conference, Toshao Mario Hastings of Kako, Region Seven was also nominated as Vice-Chairman. Hastings and Pierre were given one minute each to state why they should be elected for the position. A ballot was then cast and Pierre won by 12 votes. While Beverly Clenkian, St. Cuthbert Mission, Region Four was also nominated for Assistant Secretary/Treasurer but was ousted by Fiedtkou who won by 11 votes.

This year’s election marks history, as there were major changes in the composition of the body. FOr the first time ever, five women were elected to sit on the council; and of the 20 Toshaos nominated, only three would have served on the previous councils during the period 2015-2018.

Following the election process, newly elected Chairman Nicholas addressed the gathering and called on the executives to execute their duties and with dignity. “We must move with authority and do not make the power overcome us but be very firm in our deliberations.”

Nicholas also stressed the importance of addressing land titling and demarcation, an issue which dates back some 40 years. He said that over the next three years, the council will be working to strengthen relations with the government and indigenous Non-governmental Organisations (NGOs).

“It is a part of our history. The people will look to you and you need to listen to your people, lead with wisdom and power, don’t let power take over, they go hand in hand.  Serve your people well and work together in the interest of the people.”

During his charge to the new council, Minister of Indigenous Peoples’ Affairs, Sydney Allicock told the executives that they must demonstrate ‘humility and diplomacy as leaders.’

“In being a good leader, always keep in your mind that humility provides clarity where arrogance makes a cloud. The last thing we, as indigenous peoples, should want is to be led by someone whose judgment and actions are clouded by arrogance. We have seen this in the past and seen how it has worked against the advancement of indigenous peoples. In being humble and diplomatic you allow yourself room to learn and, dear leaders, great leadership & learning are indispensable to each other.”

Minister Allicock also charged them to build on the strengths and accomplishments of the outgoing executives and learn from their failures.

Following the announcement of the council, there was an official handing over ceremony, where the Former Chairman gave his blessings to the new council by way of a traditional ritual.