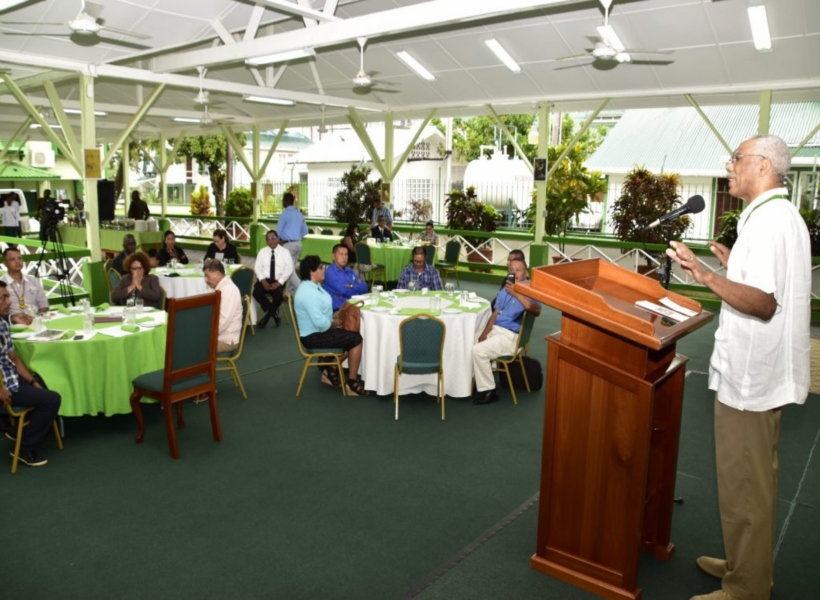 During deliberations earlier this week between the National Toshaos Council (NTC) and government, President David Granger announced that his administration will proceed with the handing over of the lease for the promised plot of land at Sophia for the construction of the NTC proposed secretariat.

The Ministry of Indigenous Peoples’ Affairs together with the Guyana Lands and Surveys Commission (GLSC) and the NTC, will also be working to identify a larger plot of land for the establishment of a complex that will include dormitories to accommodate Toshaos, conference rooms and other facilities, as envisioned by the Head of State.

President Granger said that the plot of land at Sophia only caters for a building; there is no room for expansion.

“We want you to have a campus with conference rooms, with accommodation, with benabs, and places where you could relax. We want to give you what Indigenous people deserve, so our plans are grand and we do not want to limit you to that spot and we intend to deliver on our promise,” he said.

GLSC Commissioner, Mr. Trevor Benn said that the Commission is looking at three possible locations at which the complex can be built; Diamond and Houston on East Bank of Demerara and Ogle on the East Coast.

“I know everybody want to be in the City but the City can only hold so many people and you can only do so much. The Sophia Exhibition Complex is held under lease by the Ministry of Business and of course, you are limited to what you can do there,” he said.

During the engagement, President Granger was officially introduced to the new NTC officials. The 20-member body is now chaired by the Toshao of Shulinab Village, Mr. Nicholas Fredericks and include Mr. Paul Pierre as Vice-Chair, Toshao Russian Dorrick as Secretary, Toshao Marbel Thomas as Treasurer and 16 other executive members from the various regions.

President Granger urged the leaders to keep an open door for dialogue and collaboration to take place, especially with the regional administrations, the Ministry of Indigenous Peoples’ Affairs and Central Government.

“It is only by working together with the Region and the Central Government that we could relieve the Indigenous people of poverty, of poor education, of poor infrastructure,” he said.

The Head of State also assured the NTC executives that the Government will work toward increasing the Council’s subvention; noting that July is the start of the new budget cycle.

“I expect that the NTC will get its budget into the Ministry of Indigenous People’s Affairs very soon because we present budgets now in November. You just have 90 days or so to get your budget ready,” he said.

Meanwhile, the Toshaos expressed their willingness to work hand in hand with Central Government and the relevant authorities to advance their work programme. The new Chairman said that while at times, they might not see eye to eye with Government, they are committed to meaningful dialogue and consultations.

Similar sentiments were expressed by the Vice-Chair, Mr. Pierre, who said that given the fact that the Head of State has reached out to them in this manner is a testimony to his commitment to Guyana’s Indigenous peoples and of the value he places on their contribution to national development.