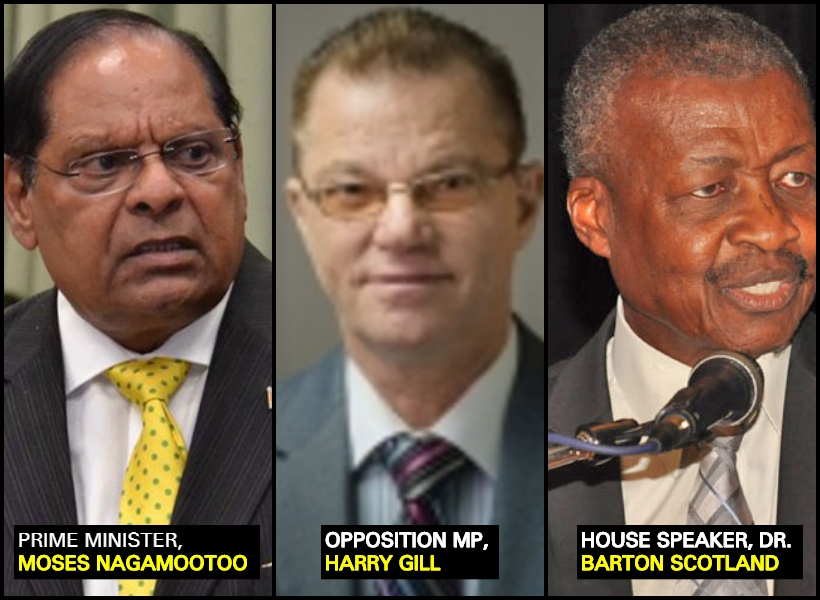 Prime Minister (PM) Moses Nagamootoo earlier today, moved a motion to have Opposition Parliamentarian, Harry Gill dragged before the Committee of Privileges for accusing the House Speaker, Dr. Barton Scotland of being bias.

This was done in a letter published in local newspapers.

During the 95th Sitting of the National Assembly, the PM stood to the defence of Dr. Scotland labelling Gill’s claim as an attack on the integrity of the Speaker.

He noted that ordinary citizens will be enraged by Gill’s “cavalier” method of going outside of the National Assembly, whist sheltering “dubiously” under freedom of expression.

Nagamootoo said that the utterances made by Gill, is a premeditated “attack” on the office of the Speaker and such an “attack” must be seen as an attack on democracy.

He noted that after learning of Gill’s claims, he sought the intervention of available sources to find out how matters such as these are handled in other jurisdictions.

A similar furore had erupted in Canada some time ago where such utterances that aimed at jeopardise the integrity of the Speaker were deemed as breaches of privilege, he said.

Nagamootoo invoked a Parliamentary Standing Order; requesting that the matter be referred to the Committee of Privileges.

Amidst the opposition’s heckling, he charged the PPP parliamentarian for the “attack on the Speaker’s integrity; imputing bias that is sufficient – prima facie – to be referred to the committee.”

Gill disseminated a letter to the media yesterday where he wrote: “The Hon Speaker of the National Assembly will be best advised to view some of the videos posted on social media to see how biased he appears, imposing his authority to disrupt an Opposition MP on a roll during the debates, or simply to prevent bad news from reaching the press.”

The Speaker acknowledged that Nagamootoo’s motion was “properly made”.

Even as the declaration was made, Opposition Chief Whip Gail Teixeira took to the floor where she questioned the validity of previous orders activated by the PPP to have government MPs brought before the committee.

Gail argued that the Constitution of Guyana enables freedom of expression outside of the House; defending Gill as having a right to speak freely anywhere and anytime.

“We have a right to speak outside of this house…So you want to send all of us to the Privileges (Committee)?” She asked the Speaker, who was – during her remarks – requesting that she take her seat.

Upon doing so, the Speaker declared that Teixeria’s last set of arguments will be “expunged from the records”.

“Those remarks were made without the permission of the Speaker. A member must atleast obtain the authority of the Speaker if he is going to address this house. That rule has not changed and it will not change,” The Speaker said.

The Committee of Privileges considers issues relating to the privileges of the National Assembly and its members, as well as having oversight for its members’ conduct.