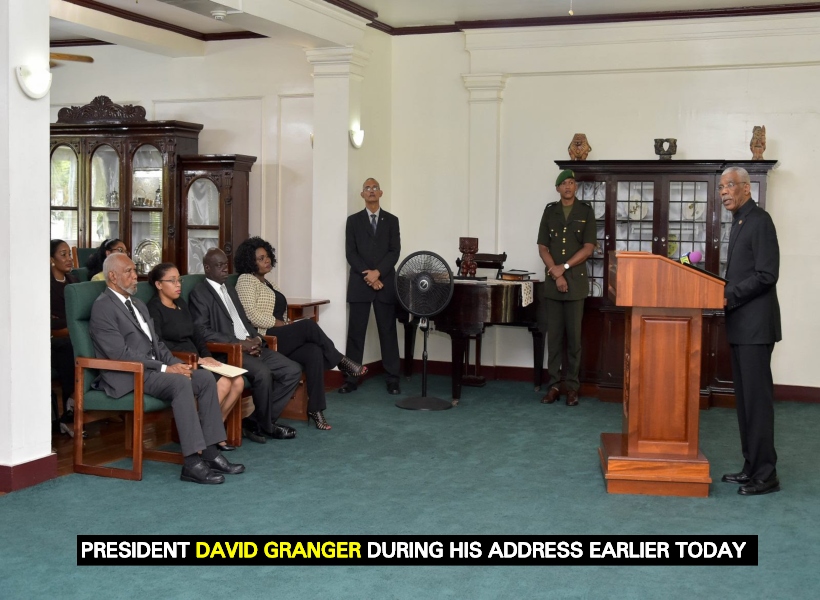 President David Granger vowed today that his government will spare no effort to expose the intellectual authors and perpetrators of the deadly violence that occurred during the period of the “Troubles.”

Speaking at the presentation of the Report of the Commission of Inquiry into the deaths of eight miners at Lindo Creek on or around the 21st June 2008, the Head of State said that the “Troubles” will be remembered for a spate of uninvestigated massacres – at Kitty, Lamaha Gardens, Bourda, Buxton-Friendship, Prashad Nagar, Agricola-Eccles, La Bonne Intention, Bagotstown, Black Bush Polder, Lusignan, Lindo Creek and elsewhere.

He noted that the truth must be determined to reinforce regard for the sanctity of life, respect for the Constitution and the restoration of public trust in those entrusted with upholding the law.

Granger said, “I commit to lifting the veil of dissimulation and deception surrounding the deaths of so many Guyanese citizens. Human safety and respect for the right to life have never been so imperiled as during the first decade of the 21st century – a period to which I have referred as the ‘Troubles’.  The ‘Troubles’ will be remembered as the darkest hour of our history.”

The President added, “It was a time of the un-investigated assassination of a Minister; of the investigation into the alleged implication of another Minister in the direction of a ‘death squad’; of the alleged implication of yet another Minister in the acquisition of a computer to track the telephone communication and location of adversaries targeted for assassination. It was a time of arbitrary arrests; of disappearances and of torture of young men; of the surge in armed robberies, narco-trafficking and gun-running. During that first, deadly decade, there were 1,317 murders and 7, 865 armed robberies.”

Granger said that Commissions of Inquiry are necessary to ascertain the facts to recommend measures to prevent recurrences of crimes. He said that inquiries will ensure that those accused of crimes are brought before the courts of law. He noted that this Inquiry started the process of searching for the causes and culprits behind some of the most deadly atrocities committed during the ‘Troubles’.

Meanwhile, Commissioner of the Lindo Creek COI, Justice Donald Trotman, in his brief remarks, said that despite several challenges and constraints, the team tried as best as possible to ensure that they could be faithful to the requirements of the terms of reference, to achieve the objectives and to obey the mandate of the Inquiry.

He also commended President Granger for his efforts to find the truth and bring justice to the aggrieved families.