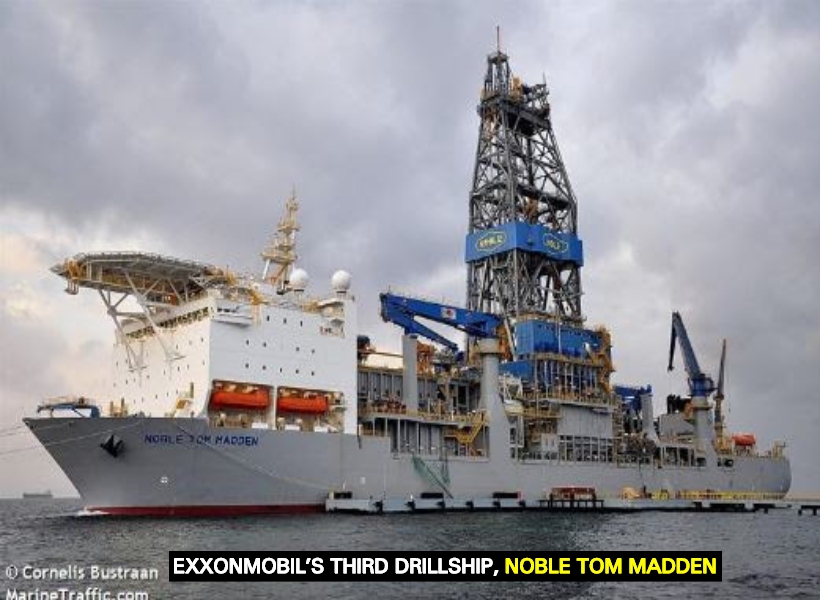 ExxonMobil has added a third drillship to its Guyana basin with the Noble Tom Madden to join the Stena Carron as the oil major ramps up exploration activities.

The announcement came by way of Noble Corporation’s second quarter report which stated:

“Following the close of the second quarter, the drillship Noble Tom Madden was awarded a contract for work offshore Guyana, which includes two firm wells, plus three optional wells.

Re-activation of the rig from its warm stacked status has begun, with the contract expected to commence in October 2018.”

The Noble Tom Madden is currently moored in an area in the Gulf of Mexico just south of New Orleans where rigs not in use are stored. With a lot of capacity in the industry, many drillships are currently warm stacked or cold stacked awaiting contracts.

This will be Noble’s second rig under contract to ExxonMobil in the Guyana basin. The Noble Bob Douglas is currently developing the Liza 1 Field for production with first-oil expected by early 2020. ExxonMobil says it has 19 targets to drill in what has become a world-class oil field.

To date, ExxonMobil has made eight discoveries out of 10 wells drilled. They are as follows: Liza, Payara, Liza deep, Snoek, Turbot, Ranger and Pacora.  The Stabroek Block is 6.6 million acres (26,800 square kilometres) and located approximately 120 miles (193 kilometres) offshore Guyana.  Total reserves to date now stand at 4B barrels.