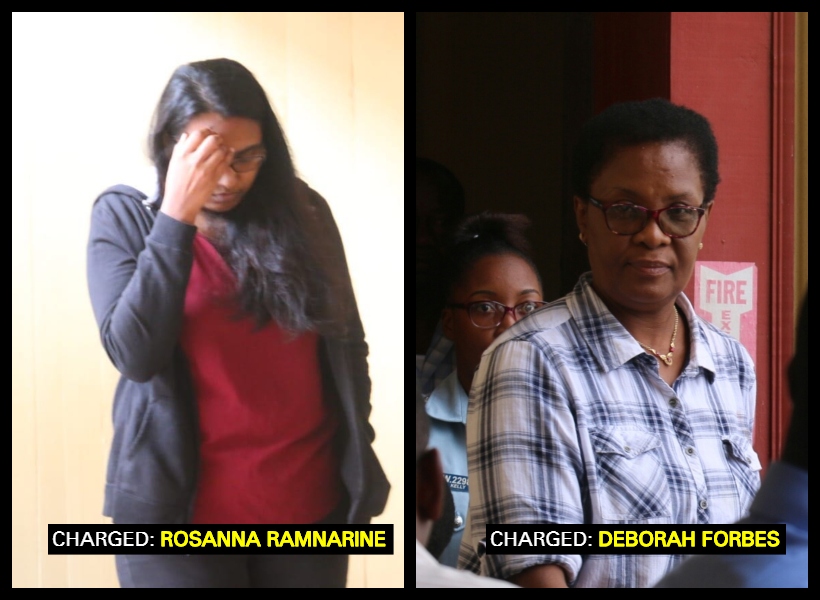 Two weeks after Rosanna Ramnarine, a former accountant at the Guyana Gold Board (GGB), was slapped with six charges in relation to stolen monies and engaging in fraudulent activities, she, along with a clerk faced more charges this morning.

They were arraigned in the Georgetown Magistrates’ Courts where they faced joint charges.

The last charge stated that both of them between January 1, 2017 and February 28, 2017 at Guyana Gold Board located at Lot 68 Brickdam, Georgetown, while being employed as a clerk or servant, wilfully and with intent to defraud, falsified payment voucher #80230, purporting to show that Clifton Alfonzo received a payment of $436, 409 on January 24, 2017.

They both pleaded not guilty to all the charges.

Both women were represented by Attorney-at-Law Nigel Hughes, who asked that his clients be released on reasonable bail citing that they are not flight risks.

Further, the lawyer told the court that his clients have been reporting to the Special Organized Crime Unit (SOCU) every week.

According to the lawyer, the matter involving the women has been engaging the attention of the police for over eight months.

Facts presented by Police Prosecutor, Quinn Harris stated that an audit was conducted at the institution and it was discovered that several payments were falsified.

Handwriting specimens were then taken from the defendants and an investigation was launched. A file was sent to the Director of Public Prosecutor (DPP) who advised that charges be laid.

The prosecutor had no objection to bail being granted and Magistrate Latchman granted bail to the defendants in the sum of $450,000 each.

Conditions of the bail are that they must lodge their passport with the court and report to SOCU headquarters every Friday until the hearing and determination of the matter.

Two weeks ago, Ramnarine was slapped with six fraud charges after she appeared before Senior Magistrate Fabayo Azore in the Georgetown Magistrates’ Courts.

Both defendants were instructed to make there next court appearance on August 27, for statements.