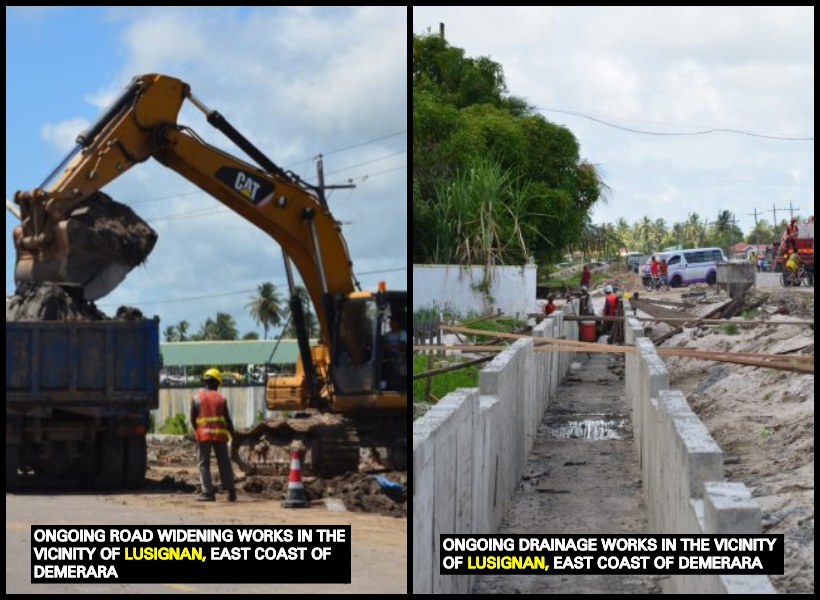 The Multi-Billion-dollar East Coast of Demerara road widening and improvement project remains on schedule for the September 2019 deadline. The extending of the four-lane section from Better Hope to Annandale is now 60 percent completed.

Technical Services Manager at the Ministry of Public Infrastructure, Nigel Erskine indicated that the plan is to complete the four-lane section by the end of the year and proceed with the upgrade of the two lanes from Annandale to Bellfield subsequently.

As it relates to roadworks, 65 percent of works including placement of the sub-base and other bases, have been completed. Materials such as white sand, loam and aggregates are being placed and compacted. The construction of pavement for some sections of the roadway is expected to begin by early September.

When completed, the four-lane section will have a median in the centre equipped with streetlights. Sidewalks will be built along populated villages, seven bridges and 12 culverts will be widened, and 11 traffic signals will be installed at busy intersections along the roadway.

Erskine said the contractor is well equipped with a sufficient supply of materials for the works. “There is an adequate supply of aggregate, sand, loam. With regards to the facilities, they have already set up the concrete batching plant and the concrete for the project is produced exclusively by that plant. Also, the asphalt concrete plant has already been assembled, calibrated and is operational,” Erskine explained.

According to the Technical Manager, residents and business owners are cooperating with the contractors during the execution of the works.

On the issue of the relocation of vendors at the Mon Repos and Lusignan Markets and the removal of utilities, Erskine said, “We are engaging various Neighbourhood Democratic Councils to provide locations to accommodate the vendors. The issue with the relocation of utilities, the progress has improved but there is still need for improvement.”

In 2016, the government and the People’s Republic of China signed a GYD $9.6Billion (US$45.5Million) concessional loan for the completion of the widening of the road between Better Hope and Belfield. Guyana has contributed $2.7Billion towards the project. (Department of Public Information)