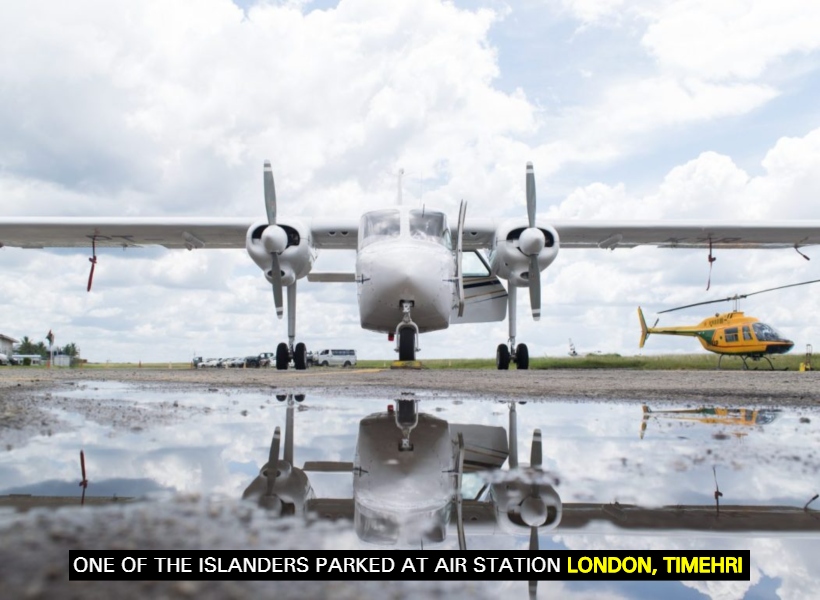 The Guyana Defence Force (GDF) has acquired two Britten-Norman Islanders. The planes arrived in Guyana on Wednesday. According to the Commanding Officer of the Air Corps, Lieutenant Colonel Courtney Byrne, the Islanders are expected to be used in search and rescue operations, evacuations, troop transport and tactical observation.

They will also be used to conduct surveillance throughout Guyana, including the Exclusive Economic Zone (EEZ),

He added that by the end of the year, the Air Corps will strengthen its fixed-wing fleet with the addition of two Sky vans. In 2019, the GDF will also seek to acquire four brand new helicopters and one unmanned aerial vehicle as part of its recapitalization.

Speaking at the commissioning of the aircraft yesterday at Air Station London, Timehri, State Minister Joseph Harmon, hailed the force’s acquisition of the planes as a demonstration of the government’s commitment to strengthening the Force’s aviation resources to carry out its mandate.

“The Government of Guyana will not hesitate to provide the support necessary to ensure our men and women in uniform are fully equipped to uphold the constitution and to protect Guyana from within and without,” Minister Harmon said.

Chief of Staff of the GDF, Brigadier Patrick West, says the aircraft is part of the GDF’s efforts to recapitalize the Air Corps.

“Through our collective efforts we can boast of having a refurbished hanger … and having our Air Corps being recertified as an AMO [Approved Maintenance Organisation],” Brigadier West explained.