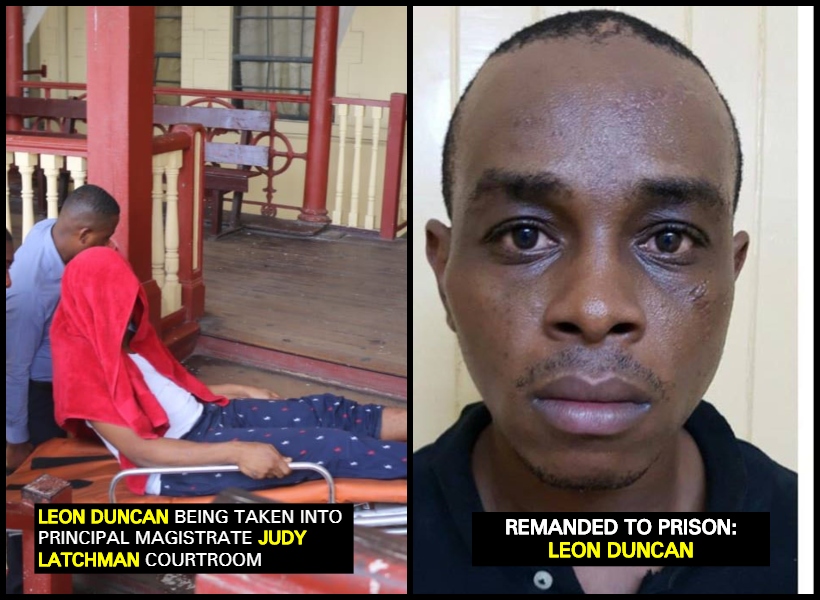 Leon Duncan called ‘Whistle, who was acquitted of murder a few years ago, was this morning slapped with a series of charges.

Duncan, who has a long list of criminal matters before the courts, made an appearance before a City Magistrate.

Shortly after 10:00 hrs, Duncan, 28, of 1977 Festival City, North Georgetown, arrived at the City Court in an ambulance.

Duncan is nursing a gunshot wound to the right thigh. He had to be fetched into court on a stretcher.

He then faced Principal Magistrate Judy Latchman and five charges, ranging from discharging a loaded firearm, robberies and assaulting police ranks, were read to him.

The first charge stated that on August 25, 2018, at Leopold Street, Werk-en-rust, Georgetown, he unlawfully assaulted Oslyn Shepard and Deon Bascom, two police officers acting in the execution of their duty.

The second charge stated that on April 15, 2018, at the National Gymnasium, Georgetown, he discharged a firearm in a public place.

It was further alleged that on July 14, 2018, at Second Street, Alberttown, Georgetown, he robbed Nikel Pinkerton of one gold chain worth $ 98,000,

The last charge stated that Duncan and Wayne Lawrence, while being in company of each other and armed with guns, on August 25, 2018 at Hadfield Street, Stabroek, robbed Shazeeda Hossain of $90,000 cash.

Both defendants denied the allegations read to them in the Georgetown Magistrates’ Courts.

Duncan ’s lawyer, Keoma Griffith, in an application to secure bail, told the court that his client is an office assistant to his grandfather, Carvil Duncan.

The lawyer added that is client was shot by the police and he sustained a gunshot wound to his right thigh and was released from hospital on instruction of the police.

Griffith went on to tell the court that his client’s wound is infected and he should be granted bail to seek proper medical treatment.

However, Police Prosecutor, Quinn Harris, opposed to bail being granted to Duncan citing the serious nature of the offences and the penalty the charges attracts.

The Prosecutor added that Duncan also has pending matters in court and if bail is granted he would not return to court for the trial.

The court heard that on August 25, 2018, around 05:30 hrs the victim, Shazeeda Hossain was at Stabroek Market vending when Duncan who was armed with a gun approached her and demanded that she hand over the cash to him.

The woman refused and Duncan hit her in the face with the gun, grabbed the cash then made good his escape in a car which was been driven by Lawrence.

A Police Officer in the area saw what had transpired and he reported the matter.

Soon after, ranks gave chase and in the process Duncan was shot in his right thigh after he reportedly tried to disarm an off duty policeman of his Force issued pistol.

The Magistrate, after listening to the Prosecutor facts, remanded both defendants to prison.

They were instructed to make their next court appearance on September 26, 2018 for report.

Last year, Duncan had an attempted murder charge against him in the Georgetown Magistrates’ Courts discharged by the same Magistrate who he appeared before today.

It is alleged that on September 26, 2016, at Oronoque and Forshaw Streets, he attempted to murder Geoffrey Pharrell.

The matter was discharged due to insufficient evidence.

Duncan was also found not guilty of the murder of Imtiaz Roopnarine at the Cool Square Hotel.

The jury found him not guilty, the matter was before Justice Priya Sewnarine-Beharry in the High Court.