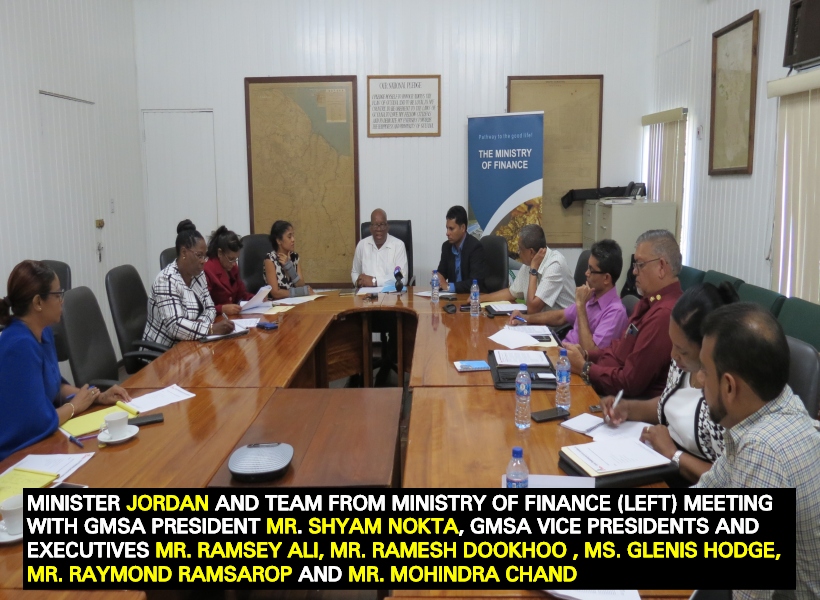 The Guyana Manufacturing and Services Association (GMSA) is worried about the anemic state of the manufacturing sector. As such, it made a strong appeal to the government today to pull back a menu of tax measures and implement various incentives that would help the industry recover.

Speaking with Minister of Finance, Winston Jordan on this subject matter was a team from GMSA which comprised of its President, Shyam Nokta, Vice Presidents Ramsay Ali, Ramesh Dookhoo and Glennis Hodge, along with several Executive Members.

While alluding to the growth in the forestry sub-sector at the half year point of 18.1 % being driven by the production of logs and roundwood, mainly from small operators, GMSA officials indicated that export of timber is now slowing down. It said that for much of the year, this sector has been plagued by the deplorable condition of hinterland roads which has been compounded by poor weather. The state of interior roads has also affected the supply of goods by manufacturers to hinterland areas.

Further to this, GMSA emphasized that tax measures introduced in Budget 2017 such as VAT on electricity, continue to impact negatively on the manufacturing sector.

Additionally, the officials said that adjustments to the VAT Act in 2018 where several items were re-categorized from Zero Rated to Exempt has affected the ability of manufacturers to reclaiming VAT on inputs made for items for export. In a missive to the media, GMSA said that the sectors which have been severely affected are wood processing and rice exports.

GMSA also pointed out that the steady decline in the sugar sector is cause for concern not only for its national impact, but also the dependence of light manufacturing for inputs from the sugar industry – specifically molasses.

Given the aforementioned, a comprehensive list of measures was presented by GMSA to Minister Jordan. These include but are not limited to the following:

·        Reversal of the policy where items that were transferred from Zero Rated to Exempt, especially for items of export from the manufacturing sector

·        Removal of excise tax on fuel used in manufacturing

·        Adjusted/reduced tariffs for manufacturing entities based on performance thresholds

·        Incentives for renewable energy options such as gasifiers to utilize biomass, e.g. in wood processing and agro-processing

·     Support for packaging and labeling facilities for agro-processors.