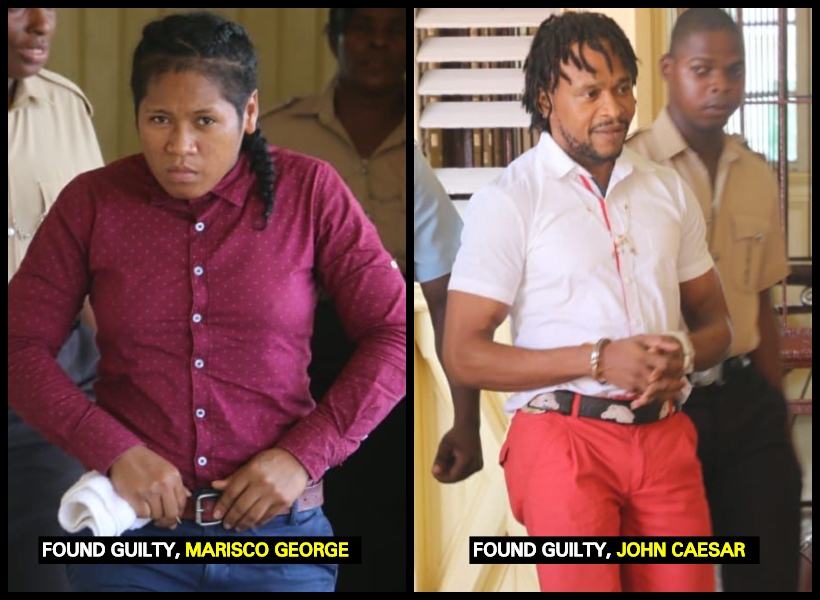 A 12 member jury this afternoon found two persons guilty of attempting to kill, and robbing a storeowner some nine years ago. The convicts, Marisco George and John Caesar were on trial before Justice Sandil Kissoon at the High Court in Georgetown.

George and Caesar were arrested back in July 2009 on charges of attempted murder and robbery with violence.

The offences were allegedly committed on Dhanwantie Pulchand who had operated Reshma’s Collection, a store within the City Mall.

The case for the State was presented by Prosecutor Abigail Gibbs.

Sentencing for George and Caesar has been deferred until October 26, following the presentation of a probation report. In the meantime, they are on remand.

According to Pulchand, who lost several teeth due to the severe beating she received at the hands of the duo, George entered her store and requested to purchase a pair of “passa passa” jeans.

The victim recalled that soon after George left the store and returned with Caesar with whom she was conversing with.  Pulchand added that after trying on the jeans in the dressing room, George requested another pair of jeans.

The victim told the court, “I went to get her another pair of jeans which was on a lower rack. When I bend, a heavy object hit me on the head. I urinate up. He (Caesar) continued hitting me with a heavy object and I fell onto the ground. I begged him to save me. I told him to take whatever he wants. He tell me shut your f%&$king mouth and stay on the ground. He continued hitting me while George was standing on my neck.”

Pulchand recounted that she lost consciousness, and when she woke up her money and cell phone were missing.