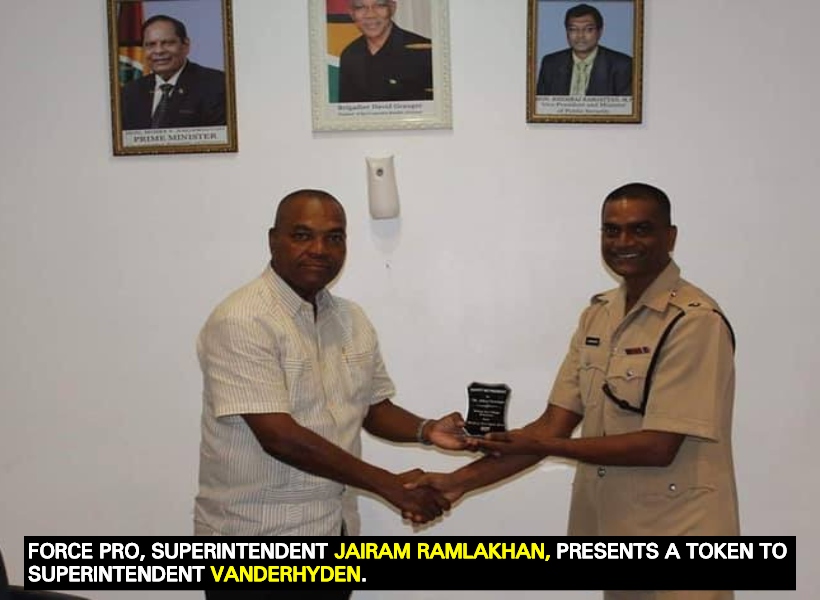 The Guyana Police Force yesterday bid farewell to one of its long serving members – Superintendent Anthony.

Superintendent Vanderhyden is said to have served the Force with distinction for almost four decades. Over those years he has held several command posts and has been known to execute the task assigned him diligently.

His most outstanding roles include but have not been limited to Sub- Divisional Officer in ‘A’ Division and Commander of ‘E’ Division.

During yesterday’s Performance Group Meeting at Force Headquarters, Police Commissioner, Mr. Leslie James DSS, and all other Senior Officers in attendance shared memories reminiscent of their initial interactions with Mr. Vanderhyden and wished him a healthy, happy and successful life as he heads into retirement.

Today he is slated to receive the honour of performing a Ceremonial Duty in Linden, the Division which he recently handed over to Superintendent Linden Lord.

Superintendent Vanderhyden departs the Force at a time when focused efforts are being made to improve its operation. This has even included moves to add Spanish to the curriculum so as to ensure that ranks can better discharge their duties to all and sundry given the growing Spanish- speaking migrant population.

Ranks of the Force have reportedly been faced with a language barrier dilemma which the Force recognised has left many a migrant in a vulnerable state. But in order to uphold law and order, the Force has adopted a proactive approach which it believes will auger well, not only for the image of the Force, but the nation as a whole.