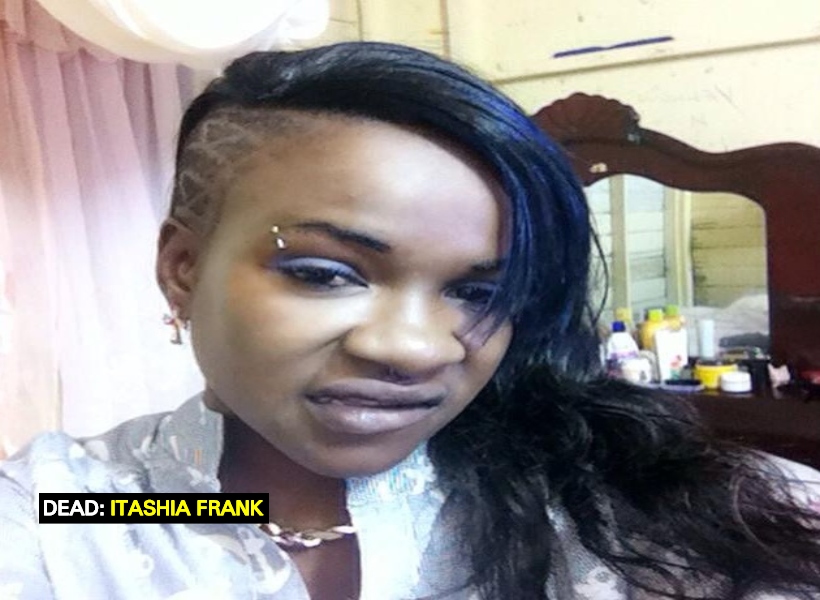 A Plaisance, East Coast Demerara (ECD) woman met a tragic death this morning when her mentally ill lover stabbed her—almost severing her head before dumping her body in a nearby drain.

The deceased has been identified as Itesha Frank of Plaisance. She moved to Berbice about a month ago to work as a bartender at the Crimson Light Bar.

It was at the bar that Frank met with the suspect, who goes by the name ‘Rasta man’ and the two started a relationship.

But the relationship ended badly and Frank is now dead.

The suspect has since been arrested and the murder weapon, a knife, has been handed over to the police.

It is unclear what led to the suspect killing the woman but police sources indicated that residents in the area claimed that the man suffers from mental issues, causing him to “trip” from time to time.

According to information received, the woman and the suspect were walking out of Crane Street this morning when the duo began arguing. This resulted in the suspect grabbing the woman and stabbing her several times.

Residents in the area told the police that the suspect was carrying the murder weapon in his pocket.

The Guyana Standard was told that the murder happened in the presence of a number of persons but people were scared to intervene because the suspect is a “mad man” and he had a knife.

After stabbing Frank, the suspect reportedly dragged the body and dumped it in a nearby drain. He was arrested while walking out of the street with the murder weapon still in his hand.

According to information received, the woman tried to run for her life but the suspect managed to overpower her and continued to stab her multiple times. When undertakers removed the body from the drain, it had to be washed before it was placed in the vehicle.