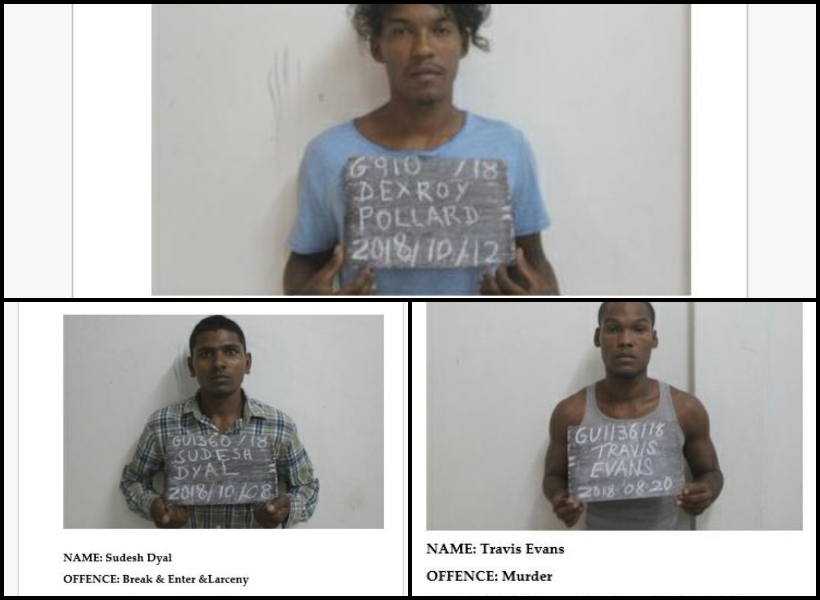 Three prisoners are on the run after escaping from the Lusignan Prison around 04:30 hrs this morning.

The escapees have been identified as 23-year-old Sudesh Dyal of Wales, West Bank Demerara; Travis Evan, 23 of ‘C’ Field Sophia; and 29-year-old Dexroy Pollard of Wales.

Director of Prison, Gladwin Samuel confirmed that the prisoners escaped from the Lusignan Holding Bay by scaling a fence. Surveillance footage at the prison showed the three men scaling the fence.

In August 2018, Evans was remanded to prison for the murder of Timehri youth, Ronsley Clarke at ‘C’ Field Sophia on August 02, last. Clarke, 21, of Fire Station Road, Timehri, was shot twice about his body in full view of his friends.

The shooting is suspected to have been the result of an old grievance between the Clarke and the accused.

Sudesh Dyal on the other hand was remanded to prison for break and enter and larceny. He was also charged for escaping from custody while his fellow villager, Dextroy Pollard, was charged for the same offence.

Up to press time, none of the escapees were recaptured.