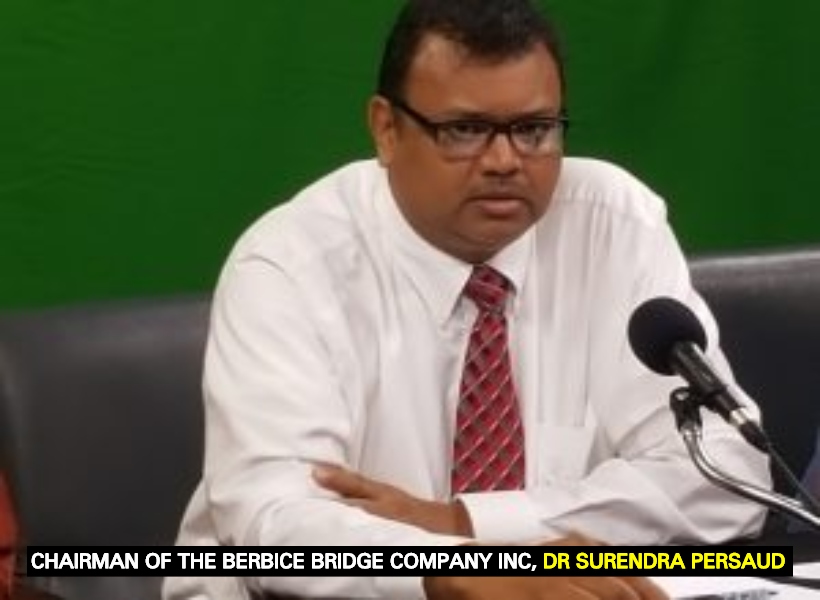 The increases are as follows:

Dr. Persaud said that the company’s decision comes in wake of the government’s refusal to comply with its request for the adjustments. In fact, Persaud said that the Board of Directors of the Berbice Bridge Company Inc. met with Minister of Public Infrastructure, David Patterson on October 11, last, to follow up on the Berbice River Bridge toll adjustments request. But the Minister made it clear that the Government was not going to facilitate the request.

The Minister, instead, proposed that Government undertake the responsibility, only, for servicing the bridge pontoons and offered to arrange a meeting with the Minister of Finance, Winston Jordan for further consultation. Persaud said that these options are outside of the contractual arrangements that exist within the Concession Agreement and are in breach of the Concession Agreement.He stressed that the actual cost of maintaining the bridge pontoons is a small part of the overall operational cost of the Bridge and would do nothing to improve the revenue of the Bridge.The Chairman said, “Let me take this opportunity to refresh everyone’s memory that the construction of this bridge would not have been possible without a partnership with the private sector in which private sector financing contributed $9.1B.  You will recall that the Company wrote the Minister of Public Infrastructure since July 9, 2018, requesting that he implement a toll adjustment to the current toll charges for the Bridge in accordance with a prescribed toll formula.”

Persaud added, “We have now been formally informed that the Government will not accommodate this request. At our previous press conference, I pointed out that the failure of the Government to implement the previously requested toll adjustments has resulted in the Company being unable to meet its contractual obligations to its lenders.”Persaud said that the Company, unfortunately, has accumulated losses in excess of $2.8B, has never paid dividends to its ordinary shareholders and is now in default of obligations to its numerous stakeholders, including the National Insurance Scheme (NIS).

The Chairman said, “It is important that we understand that the NIS’s investment in the Bridge represents an investment of all contributors to the scheme, without exception, past, present, and future. These investments by the private companies have now been flagged by their respective auditors and regulators as impaired…”Persaud maintained that the toll ought to be adjusted in accordance with the agreement, in good faith, to allow the Company to properly maintain and operate the infrastructure.