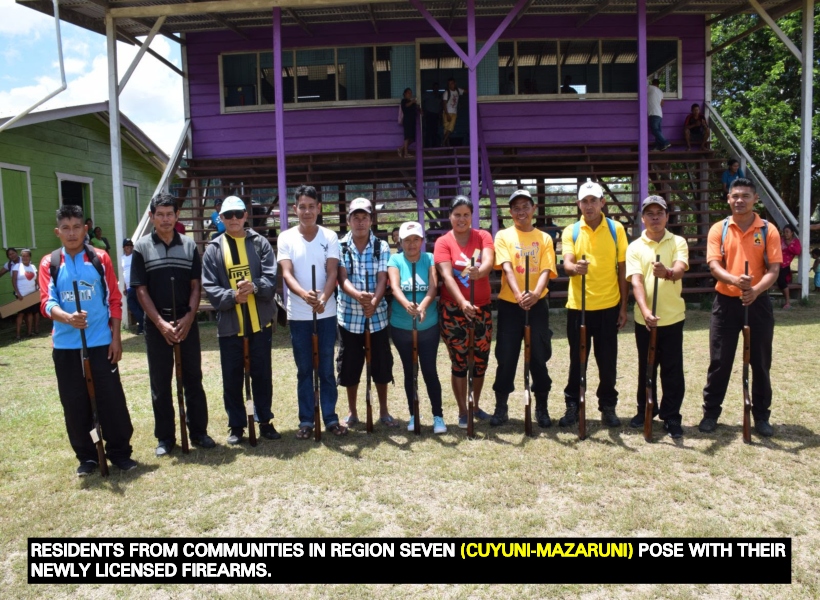 Minister of Indigenous People’s Affairs, Sydney Allicock handed out another batch of licensed firearms to Indigenous residents from communities in Region Seven, Cuyuni-Mazaruni.The distribution was made over the weekend in the Indigenous community of Kamarang, Upper Mazaruni.“We’re very pleased to be able to deliver on our promise … I think good things come to those who wait and today you have a good thing in your hand for your livelihood,” Minister Allicock told residents.

This weekend’s distribution is a follow up to the previous one, Minister Allicock noted. He explained the visit was needed to resolve application issues for some residents.Recipients of the licensed firearms were also briefed on the safe handling, usage, and storage of their firearms, by members of the Guyana Police Force (GPF). The newly licensed firearm holders were supplied with ammunition.

Earlier this month, Minister Allicock and Ministers of Public Security, Khemraj Ramjattan and Public Affairs, Dawn Hastings-Williams issued firearms and licences to residents from 12 villages in Region Seven.Back in 2015, residents had turned in their unlicensed firearms during the Ministry of Public Security’s amnesty programme. The ministry’s plan was to regularise the system, conduct safety checks and allow for firearm holders, including indigenous people to be licensed.