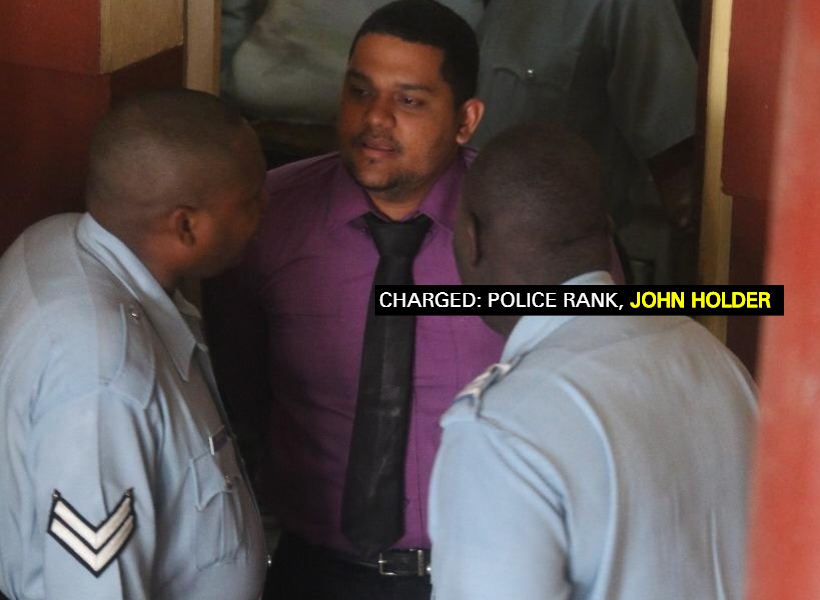 A Police Constable, who is the key witness in the matter involving businesswoman, Maryann Daby, was this morning charged with attempting to pervert the course of justice.

Daby was charged for attempting to kill another police rank officer.

However, John Holder, 28, of North Road Bourda, appeared this morning before Principal Magistrate Judy Latchman who read the charge to him.

It is alleged that between August 10,2018 and October 2,2018 at Georgetown, he willfully attempted to pervert the course of justice by deviating from his police statement dated May 13,2018, in the case involving Police vs Maryann Daby.

Holder was not required to plead to the indictable charge after it was read to him in the Georgetown Magistrates’ Courts.

His lawyer, Steven Roberts, in a successful bail application for his client, told the court that Holder told the truth under oath and did nothing wrong.

The lawyer added that his client was suspended pending further investigation into the matter.

Police Prosecutor, Shellon Daniels made no objections to bail being granted to Holder but asked that conditions be attached.

Facts presented in court stated that Holder is a serving member of the Guyana Police Force and a key witness in the matter of police vs Maryann Daby.

The Prosecutor said that Holder gave several different statements in the matter in relation to what he had done.

The court heard that while Holder was testifying in the matter, which is before a City Magistrate, he deviated from his original statements and he told the court that a top ranking officer instructed him to change his statement, hence he did same.

The Magistrate, after listening to both sides, released Holder on $300,000 bail.

She also instructed him to report to the clerk of court attach to court three every Monday until the completion and determination of the trial.

He will make his next court appearance on November 20.

Few months ago, businesswoman Maryann Daby was arraigned before a City Magistrate for allegedly trying to kill a police rank with her unlicensed firearm.

Daby, 25, of 127 D’Aguiar Park, Houston, Georgetown, was not required to plead to the charge which alleged that on May 13, last, at Albert Street, Thomas, Lands, Georgetown, with intent to commit murder, she attempted to discharged a loaded firearm at Police Constable, Christopher Kissoon.

It was reported that Daby and her friends were at the Georgetown Motor Racing and Sports Club when Constable Kissoon, who was at the club, heard what appeared to be gunshots.

Kissoon, upon checking, reportedly saw Daby firing shots in the air and he confronted her. She then allegedly pointed the gun to his head and pulled the trigger, luckily there were no bullets in the gun.

The Preliminary Inquiry (PI) into the matter is currently ongoing before a City Magistrate.