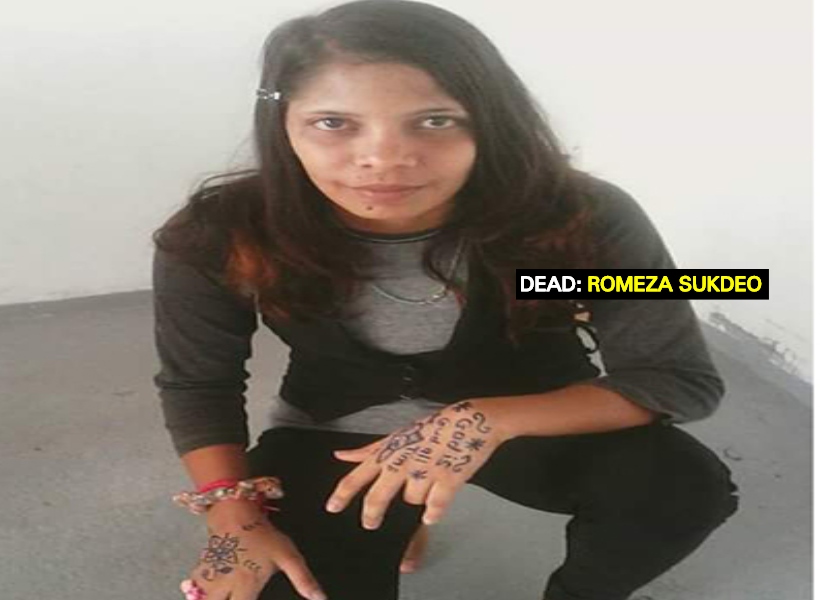 An ex-convict has confessed to murdering 22-year-old Romeza Sukdeo—whose partially decomposed body was found on Sunday at Parika, East Bank Essequibo (EBE)—after she demanded additional payment after their sexual engagement.

Based on reports received, the suspect, who was recently released from prison, met with the young woman’s alleged partner and asked that he arrange for someone to have sex with him. The suspect allegedly agreed to pay $10,000.

The Guyana Standard was told that on Friday night, Sukdeo met with the ex-convict and offered her services.

The suspect told the investigators that after they had finished having sexual intercourse in an empty lot at Hydronie Market Road, he took out $10,000 and attempted to pay the deceased, who immediately began fighting with him for more cash.

According to information received, the victim wanted $30,000 for her services. This led to an argument and the suspect alleged that he held onto her neck and strangled her while banging her head on the ground.

Upon realizing that the 22-year-old drug addict was dead, the suspect claimed that he immediately left the scene. Her body was eventually found on Sunday by passersby.

A Post Mortem examination showed that Sukdeo died of manual strangulation and blunt trauma to the head. Her body was left to rot in a clump of bushes.

The Guyana Standard was told that the young woman was last seen alive by her mother on Diwali night when she visited.

“She (deceased) come and sleep two nights by me and she said that these guys after her and if she die then I should go to the police and tell them who kill she,” the mother said.

“My daughter left home since she was 16 and she start smoke the drugs. Since then, I trying every day to get her home back but she not coming home. She does be from one place to the next and sometimes I does see her and then sometimes she does disappear for days,” the distraught woman revealed.