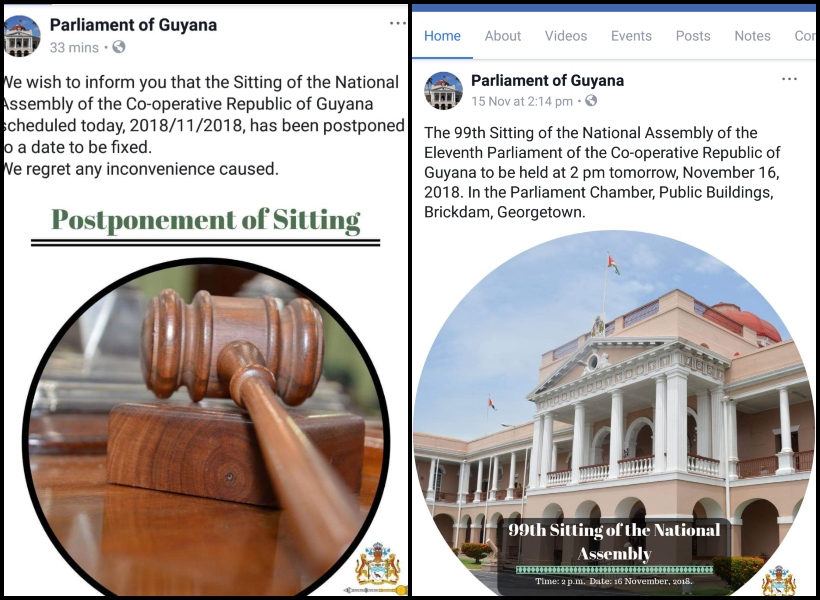 The 99th Sitting of the National Assembly of the Eleventh Parliament has been postponed mere minutes before the sitting was scheduled to get underway today, November 16.

Reports reaching the Guyana Standard indicate that the announcement was made by Deputy Clerk of the National Assembly, Hermina Gilgeours, even as Members of Parliament (MPs) on the Opposition’s side of the House sat in the Chamber awaiting the convening of the sitting at 14:00hrs.

The absence of the Government MPs comes mere hours after the conclusion of a joint press conference hosted this morning at Congress Place. At this press conference, executive members of the coalition made no qualms in sharing their dissatisfaction with the Opposition’s recently lodged No-Confidence Motion. Acting President and Prime Minister, Moses Nagamootoo deemed the motion “an act of provocation”, “insensitive and childish” in light of President David Granger’s hospitalization in Cuba.

Up to yesterday, the Parliament of Guyana posted a notice of the sitting on its Facebook page.

While the sitting is supposed to begin at 14:00hrs, only less than an hour ago, Parliament Office posted the cancellation on its page.