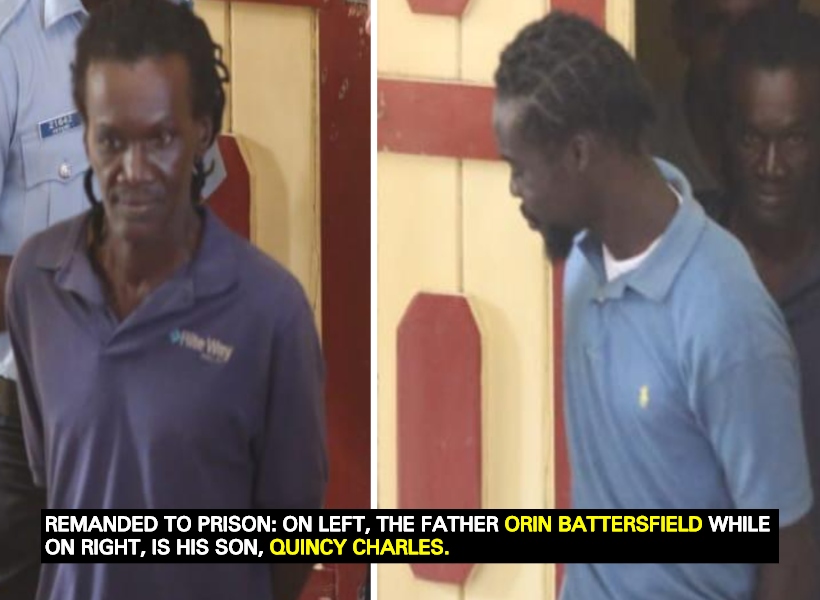 A North Ruimveldt father and son duo was this morning arraigned before a City Magistrate and remanded to prison for allegedly trafficking 10 lbs of marijuana.

Orin Battersfield, 53, a labourer, and his son, Quincy Charles, 28, both of North Ruimveldt Squatting Area, appeared before Chief Magistrate Ann McLennan in the Georgetown Magistrates’ Courts.

They denied the allegation which stated that on November 19, 2018, at North Ruimveldt, Squatting Area,  they had in their possession 4.5 kilograms (9.9 lbs) of marijuana for the purpose of trafficking.

The father and son were jointly charged with the offence.

Facts presented by Police Prosecutor, Gordon Mansfield, stated that on the date in question police, acting on information, went to the defendants’ address an made contact with the father and son.

The court heard that a search was conducted in the yard and a plastic bucket was found three feet away from the house. Upon opening the bucket, ranks found a quantity of leaves, seeds, and stems suspected to be marijuana.

The allegation was then put to both men and Charles orally admitted to owning the drugs, hence both men were arrested and taken into custody.

The father and son were represented by attorney-at-law Mark Waldron who in a bail application for his clients told the court that the issue of multiple occupants arises since they are over seven persons residing at the premises.

However, the Magistrate, after listening to both sides, remanded the duo to prison.


They were instructed to make their next court appearance on December 10, 2018.