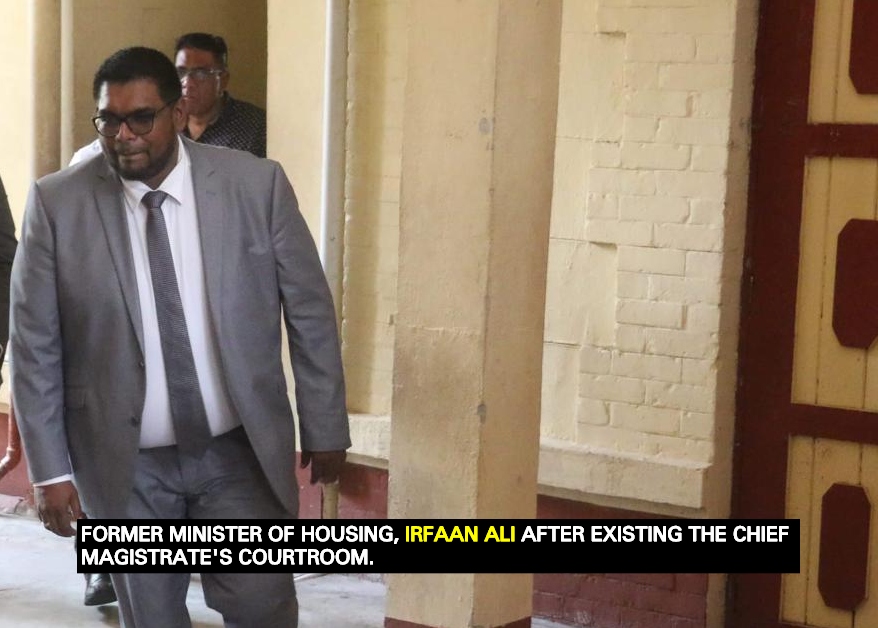 Former Minister of Housing, Mohamed Irfaan Ali was this morning slapped with 19 charges in connection with the Pradoville Two case in which he allegedly sold 19 State Lands to 19 high ranking officials.

He also sold the lands to former General Manager of the Guyana Gold Board who is the  daughter of former President Donald Ramotar, Lisaveta Ramotar.

Soon after Ali’s arrival, he was escorted into the courtroom of Chief Magistrate Ann McLennan where the 19 fraud related charges where read to him.

Ali, upon entering the courtroom, was greeted by supporters including former Prime Minister Samuel Hinds and other members of the People Progressive Party Civic (PPP) who were all seated in the courtroom.

He then went and stood in the prisoners dock where he spent the next hour.

It is alleged that Ali, between 2011 and 2015, conspired with persons unknown to defraud the Government of Guyana by acting recklessly when he sold 19 plots of land at Plantation Sparendaam and Goedverwagting.

The 38-year-old, was not required to make a plea to any of the 19 indictable matters after they were read to him.

Special Organized Crime Unit (SOCU) prosecutor, Patrice Henry, did not oppose bail being granted to Ali but asked that it be in a reasonable amount and that conditions be attached.

Navindra Kissoon is the lead lawyer representing Ali. In addressing the court, Kissoon said that Ali is the sole breadwinner for his family and has no criminal record.

Anil Nandlall, who also has an ongoing case brought against him by the state for actions carried out during his ministerial tenure, is another one of Ali’s lawyers.

Nandlall spoke right after Kissoon. He told the court that he had never seen a charge of this nature, and that it’s the first charge of its kind ever to be instituted in Guyana.

Nandlall went on to tell the court that the charge is so unique that it will be difficult for the sitting Magistrate to precede over the matter since no one has ever been charged with such an offence.

Manickchand, who is also representing the defendant and is also one of the occupants of the State land in question, told the court that Ali did nothing wrong and all the house lots were given under a subsidy program.

She went on to tell the court that the charges are political in nature.

The Magistrate, after listening to both sides, released Ali on his own reconnaissance (self bail).

The former Minister was instructed to make his next court appearance on January 7, 2019.

The charges against Ali come months after SOCU completed its investigation into the allocation of lands at ‘Pradoville Two’ to Cabinet members of the People’s Progressive Party/ Civic Administration and their close associates.

It was reported that Ali personally handled the transactions of the State Lands to his friends of the PPP/C’s former Cabinet members.

A forensic audit was conducted which revealed that the recipients grossly underpaid for the lots by a total of nearly $250 million. It was stated that of the 28 lots, totalling 12.1187 acres, only 3.9693 acres remain unallocated.