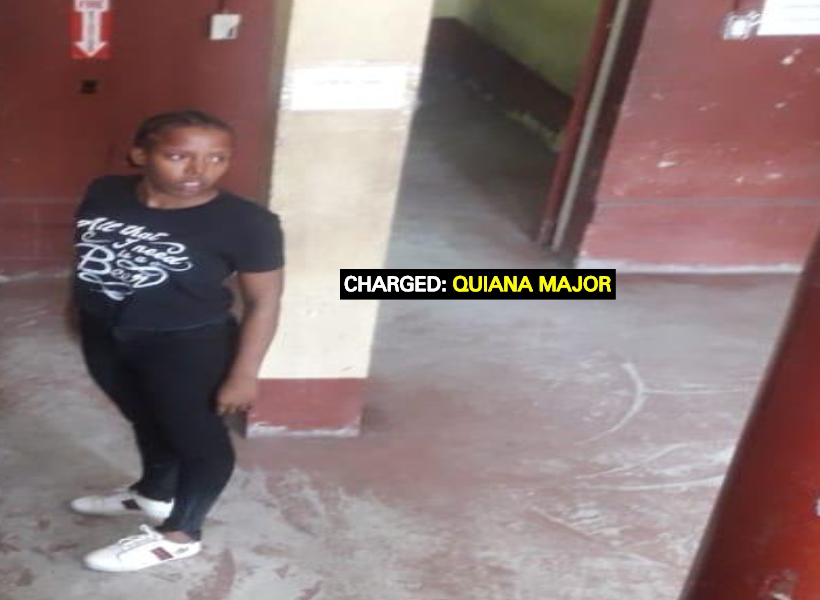 The woman who allegedly stabbed her lover a few weeks ago and allegedly set his stall on fire at the Stabroek Market Wharf appeared this morning before a City Magistrate.

The woman, Quiana Major, 23, of Tucville, was charged with unlawful wounding.

She is accused of stabbing her spouse, Campton Ferreira twice.

It is alleged that Major, on November 26, 2018, at Stabroek Market Wharf, Georgetown, unlawfully and maliciously wounded Compton  Ferreira also known as “chop up”.

She denied the charge after it was read to her by Chief Magistrate Ann McLennan in the Georgetown Magistrates’ Courts.

Soon after the charge was read, Compton, who was present in court stood before the Magistrate and told the court that he does not wish to proceed with the matter against Major.

The Magistrate after inquiring why, was told by Compton that he only received a ‘slight wound’ with a knife.

The Magistrate then dismissed the matter against the  woman on the grounds that no evidence was offered by the victim.

Major was however not charged with arson since that matter is still being investigated.

It was reported that around 04:00 hrs on November 26, 2018, Major and Compton who is a fish vendor had a domestic dispute and she allegedly stabbed him twice to his abdomen with a knife after he refused to give her money.

According to reports, when the injured man went to report the matter, Major set his stall on fire.

It is unclear whether the suspect walked with explosives, but persons who were in the area told the police that the woman was seen kneeling in a corner, setting the fire. She then ran away.

The fire quickly spread to the other stalls.

Fire-fighters managed to save the fire from spreading to other stalls. Fish vendors were mostly affected. They lost freezers, fridges, boat engines and other tools.