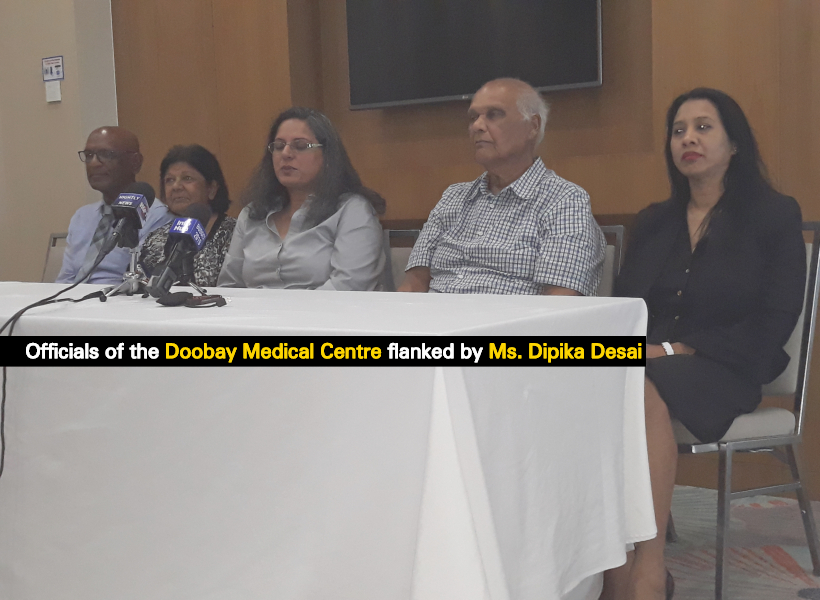 In light of the realisation that renal failure patients are at even greater risk once they commence dialysis, the Doobay Medical Centre, situated at Annandale, East Coast Demerara, has moved to spearhead a pilot risk assessment study.

The study, which will target 100 Guyanese, will be facilitated by the McMaster University’s Population Health Research Institute of Canada.  At a press conference held at the Georgetown Marriott Hotel, officials of Doobay Medical Centre and their Canadian counterparts highlighted the need for such an undertaking in Guyana.

According to Programme Manager of the Population Health Research Institute, Ms. Dipika Desai, when attempts were made to ascertain Guyanese’s risk to renal failure it was found that studies in this regard were lacking.

“We did a little bit of literature review to see what published research there is about Guyana but unfortunately we didn’t find much and so we said that’s what we have to do…build a baseline,” Desai said. According to her, the intent of the study is to determine what risk factors are associated with people developing end stage renal failure.

“This assessment is to determine whether they have high blood pressure, diabetes or high cholesterol and so on, and we at the centre will provide this service free of cost to the participants,” said Head of the Medical Centre Dr. Budhendranauth Doobay. Dr. Doobay disclosed too that participants will be eligible for free medication should the assessment find them to be at risk.

Plans to commence the process were finalised this week as approval was granted by the Hamilton Integrated Research Ethics Board which covers the McMaster University. The venture has also gained approval from the local Ministry of Public which will have access to the findings once the assessment is completed.

“In this study we are going to focus more on people who are not dialysis patients…people who are generally among the healthy population. So anybody from the general population is welcomed to come and get screened at the Centre,” Desai said.

As part of the screening process, persons will be subjected to physical measurements including that of their height, weight, waist and hip. This is essential, Desai said, to determine their highest risk factors.  “We will also do blood pressure measurement to get an assessment on what is the level of hypertension in this population and we will do some blood work which will be analysed at the Doobay Medical Research Centre,” she related. Once the necessary information is collected, Desai said that it will be used to calculate what is called the Framingham Coronary Heart Disease Risk Score. This score is intended to estimate the risk of having a heart attack in the near future and, according to Desai, it is a widely used risk score used by the World Health Organization (WHO) and many other institutes.

“We will then use a defined protocol that was developed with WHO and another study done by the Population Health Research Institute to train the staff members [of the Doobay Medical Centre] to screen participants and assess their risk as well as recommend treatment options based on the protocol. If medical treatment is required then that medical treatment will be reviewed and approved by a physician,” Desai explained.

Once the pilot risk assessment is completed it will pave the way for future assessments to be conducted on a wider scale thereby allowing the local health sector to put measures in place to arrest renal failure wherever possible.